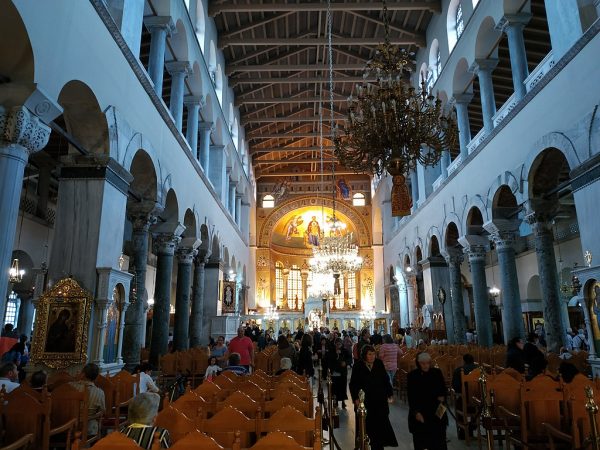 Hundreds of people began gathering early on Monday morning at Thessaloniki’s fifth-century Church of Agios Demetrios, on the annual feast day of the patron saint of the city, reports Greek Reporter.

This day also marks the liberation of the Greek city by the Greek Army in 1912 during the Ottoman Wars after five centuries of occupation by its Turkish overlords.

Pilgrims wearing masks waited patiently in long lines to give their respects to the saint at the iconic church of Thessaloniki, which was one of the most important cities during the early years of Christianity, and where the Apostle Paul once preached.

The 7th-century mosaic of the martyr, located in the church dedicated to him, is one of the earliest images of St. Demetrios. According to the early accounts of his life, including the “Miracles of St. Demetrius,” the martyr was born to Christian parents in Thessaloniki, in what was then called the region of Illyricum, in the year 270.

Demetrius, born into a senatorial family, became proconsul of the district of Thessalonica. As a result of standing up for this faith, Demetrios was run through with spears in approximately the year 306 AD in Thessaloniki, during the Christian persecutions of Galerian, which matches his depiction in the 7th century mosaics.

The President of the Republic, Katerina Sakellaropoulou, attended the ceremony along with a limited number of officials, due to coronavirus restrictions.

Most viewed articles
A Great Time to Join the Orthodox Church220
New Jersey Governor Signs Bill Legalizing Abortion Up To Moment of Birth93
The Way of Christ Is The Way of Love76
Brooklyn Street Co-Named for Antiochian Pastor Who Served a Half Century There61
Metropolitan Hilarion: the Church and traditional confessions have done everything possible to improve the situation in Kazakhstan53
First Church in the Antiochian Archdiocese Named for St. Xenia of St. Petersburg Prepares for Feast Day48
Metropolitan Hilarion Celebrates the 20th Anniversary of His Episcopal Consecration45
My World’s Different44
Patriarch Porfirije of the Serbia: Our Position on the Church Issue in Ukraine Has Not Changed13
1
Most popular authors
Frederica Matthewes-Green220
Pravmir.com team156
Ryan Foley95
Fr. Theodore Stylianopoulos76
Peter Samore61
Protopresbyter Themistoklis Mourtzanos44