Metropolitan Hilarion: “During Crises, the Church Cares, First of All, about Helping People” 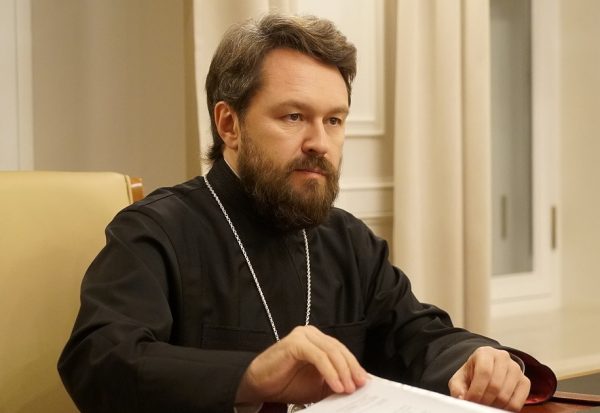 The issue of increasing assistance to refugees and civilians in the current difficult situation became one of the main issues discussed at the meeting of the Holy Synod of the Russian Orthodox Church on March 24, 2022, said Metropolitan Hilarion of Volokolamsk, Chairman of the Department for External Church Relations.

“In the current situation, we could not ignore the topic of Ukraine, primarily in its humanitarian aspect. We talked about how to intensify our work to help refugees, because refugees arrive both in the Russian Federation and in other countries,” Metropolitan Hilarion said in the Church and the World program, reports the press service of the Synodal Department for Church’s Relations with Society and the Media.

The metropolitan recalled that today the Church is already actively involved in providing assistance to internally displaced people.

“The Synodal Department for Charity and Social Service has been working on this on a daily basis: a collection of medicines, food, and essentials has been announced,” the hierarch added.

According to Metropolitan Hilarion, the humanitarian aspect of the crisis is taken very seriously by the Church, because the Church, first of all, cares about the well-being of people, about helping them. At the same time, he noted that the Church supports various forms of charity, and itself, in turn, helps refugees from Ukraine not only spiritually, but also financially.

“Many dioceses of the Russian Orthodox Church in Russia are involved in collecting aid for refugees. Many host refugees, including monasteries and churches. Where there is an opportunity to accommodate refugees, they are given asylum,” said the archpastor.

“The Ukrainian Orthodox Church does a great job of helping refugees on the territory of Ukraine, and for those refugees who find themselves in European countries, assistance is provided by the Local Orthodox Churches, in particular, the Polish Church and the Romanian Church,” Metropolitan Hilarion mentioned.