Metropolitan Hilarion: Jesus Christ’s Miracle of Healing the Paralytic is a Sign of God’s Omnipotence 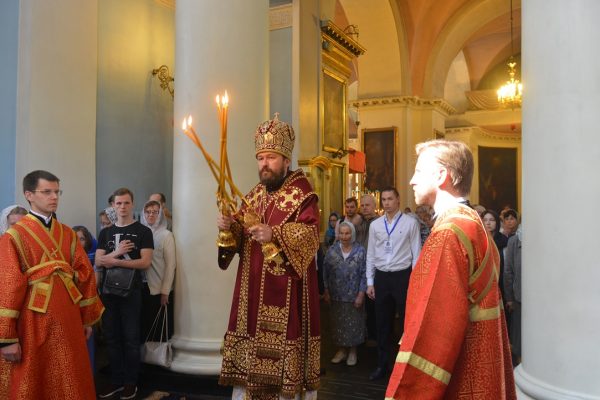 On 19 May 2019, 4th Sunday after Pascha, of the Paralytic, Metropolitan Hilarion of Volokolamsk, chairman of the Moscow Patriarchate’s Department for External Church Relations, celebrated the Divine Liturgy at the Church of ‘The Joy of All Who Sorrow’ Icon of the Mother of God in Bolshaya Ordynka Street, Moscow.

Concelebrating with Metropolitan Hilarion were clerics of the church.

After the Litany of Fervent Supplication, the archpastor lifted up a prayer for peace in Ukraine.

At the end of the service His Eminence delivered a homily, saying in particular:

“On the 4th Sunday after Pascha we hear a story from the Gospel according to John about Jesus Christ’s miracle of healing the paralytic who lay by the Sheep’s Pool in Jerusalem for thirty-eight years. Around that pool there lay a multitude of lame, invalids, blind, paralyzed, waiting for the water to be troubled by an angel of God who from time to time went down, and the first to enter the pool was healed of his infirmity.

“When the Lord Jesus Christ came to the Sheep’s Pool, He saw among the great many sick people one paralyzed man. Christ walked up to him and asked, ‘Do you want to be healed?’ (Jn 5:6). The sick man answered him, ‘Sir, I have no man to put me into the pool when the water is troubled, and while I am going another steps down before me.’ (Jn 5:7).

“And the Lord healed the man, who lay paralyzed for 38 years.

“It is difficult for us to imagine how a man can lay motionless for 38 years, and difficult to comprehend how a paralyzed man can in the twinkling of an eye be healed by the word of the Lord Jesus Christ. Yet, such miracle is possible when God wishes to interfere in man’s life.

“The story that we have heard today is the Evangelist’s witness to one of such miraculous interferences. In reality, there were many such miraculous interferences of God in people’s lives. The Evangelist John himself tells that were every one of them to be written, the world itself could not contain the books that would be written, and that he described only some of the episodes from the life of the Lord Jesus Christ.

“Today’s Gospel reading reveals the miraculous power of our Lord the Saviour. Why is it that during this Paschal season we are to hear about the healing of the paralytic? It is not only because during the whole season of the Holy Pascha the Gospel according to John is being read and every Gospel story tells us that Jesus Christ was not an ordinary man, but the Incarnate Word of God Which in the beginning, in the eternity was with God and through Which He created all the cosmos, all the universe.

“The Divine Word, having been incarnated and become Man, revealed Himself, among other things, through the miracles performed by the Lord Jesus Christ. And Jesus Christ’s miracle of healing the paralytic is a sign of the omnipotence of God.

“Many people suffer from various infirmities, both physical and spiritual, being paralyzed not only in their bodies, but also in their souls. The Lent is a time of spiritual exertion, but when Easter comes, many of us relax because these days the Church does not require from us with all the strictness to perform an ascetic deed of repentance, but blesses us to rejoice in the Risen Saviour. However, this joy may turn into a spiritual paralysis for some people. The Lord reminds us that we should never rest, but live to the limit of our spiritual abilities, always having Him before our eyes, for He alone can heal all our infirmities, both bodily and spiritual ones, and come to our aid not only in the moments when we ask Him to, but also when we do not expect it.

“Let us beseech the Lord to heal all our infirmities. Let us pray about all the lame, invalids, blind, paralyzed, about all those suffering and waiting to be healed by Him. And let us ask Him to help us live not in paralysis, but in spiritual exertion which is necessary for making our whole life a preparation for the Heavenly Kingdom, where once we will face to face meet with Christ the Saviour, just like the paralytic once met with him.”