Source: ROCOR
Natalya Mihailova | 01 July 2014
On Sunday, June 29, 2014, the 20 th anniversary of the glorification of St John of Shanghai and San Francisco was celebrated, and the rite of consecration to the episcopacy was performed over Archimandrite Nicholas (Olhovsky) as Bishop of Manhattan. 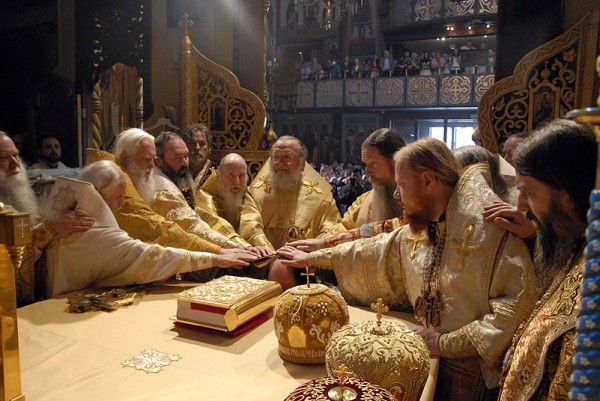 This rare ceremony drew many worshipers . Long before the beginning of the service, clergymen from various dioceses of the Russian Orthodox Church Outside of Russia began to arrive, along with representatives of other Local Orthodox Churches, and also pilgrims from various cities of the USA and other countries. His Eminence Metropolitan Hilarion of Eastern America and New York led divine services, along with members of the Council of Bishops and other Orthodox hierarchs.

The Kursk – Root Icon of the Mother of God “ of the Sign ” was present at the services .

The rite of confession began shortly after the solemn greeting of the First Hierarch of the Russian Church Abroad. During this rite, the episcopal nominee details the teachings of the Orthodox Church and gives an oath to all to observe the rules of the Apostles and the Ecumenical Councils. After this, a protodeacon intones the customary “Many Years.”

During Divine Liturgy, the archpastors performed the laying on of hands—the episcopal consecration—of Archimandrite Nicholas.

The Cathedral Choir and the assembled choir of the 13 th All-Diaspora Russian Orthodox Youth Conference sang joyfully and splendidly under the direction of VV Krassovsky and GA Kotar.

After the consecration of the Holy Gifts, the new Bishop Nicholas of Manhattan performed an ordination to the diaconate of Subdeacon Athanasius Ferguson of SS Peter and Paul Church in Santa Rosa, CA.

Before Communion, a sermon was read by Archimandrite Irinei (Steenberg).

After Liturgy, a moleben was performed to St John of Shanghai and San Francisco before the reliquary containing his uncorrupt relics, followed by a procession of the cross around the cathedral.

The rite of consecration concludes with the entrusting of the new bishop with a staff. This occurs at the end of divine services, with all the clergymen emerging from the altar to the center of the nave. Metropolitan Hilarion then delivered a sermon:

Your Grace Bishop Nicholas, Dear in the Lord Brother and Concelebrant!

By Divine Providence and through your election by the Council of Bishops of the Russian Orthodox Church Outside of Russia, you embark upon a new path in life and service. Through the laying on of hands, your personal Pentecost has taken place. On the day of the celebration of the saint whose uncorrupt relics abide here, St John the Miracle-worker, you have joined the host of hierarchs of our dear and great Mother—the Russian Church.

The Lord has prepared you for this important event since your childhood. You learned piety through the examples of your father and your late mother, who displayed for you a living image of life in Christ, rearing you in the spirit of the Church, in love for God and His saints. They infused you with love for the church and for divine services. From your youth, you came to love to make pilgrimages to holy sites, and especially to Holy Trinity Monastery in Jordanville, whose seminary the Lord led you then to study in, and to serve Metropolitan Laurus of blessed memory. Here you became a witness not only of his personal monastic podvig, but his glorious victory over the many years of division within the Russian Orthodox Church.

During today’s solemn services, St John, who, just before his departure into eternity, had held in his hands the Kursk-Root Icon of the Mother of God “of the Sign,” was called the “faithful servant of the Most-Pure Hodigitria [Protectress— transl .].” After the repose of your spouse, God was pleased to place you in the service of the Most-Blessed Virgin, and you accompanied the Kursk-Root Icon, the Guide of the Russian diaspora, to the parishes, hospitals and homes of clergymen and believers of many dioceses of the united Russian Church. I believe that this obedience has brought you to the priestly service, and then to monasticism. These God-pleasing obediences—those of the priesthood and of monasticism—should be revealed fully in your archpastoral service through self-sacrificing love for your neighbor, the mortification of your “self,” the frequent pious celebration of divine services and prayer with your flock, through your care for your clergymen, parishes and parishioners, support of monastics, the preservation of the legacy of the Holy Fathers and of the traditions of the people, “that ye receive not the grace in vain” (2 Corinthians 6:1).

During these Lenten days which lead us to the feast day of the “chief among Apostles,” you have received the heavenly anointing, the flame-like grace of episcopacy. In establishing this Lenten period, the Church wished to encourage all mortals to direct their inner gaze at two remarkable persons—the Chief among Apostles Peter and Paul. It was once revealed to Saint Hermes, one of the Apostles, that the Lord builds a tower of living stones—which is the Church ascending to the Heavens, to the abode of the eternal. It was these holy Apostles who were the foundation stones of this tower, of the Church of Christ. The goal of episcopal service is this: to emulate the Apostles and become a stone worthy of the Construction of our salvation. Not all stones are suitable for the building of the Church, but only those possessing the perfection of Apostolic faith. Upon this zeal, and upon such faith, the Church of Christ is built. It is necessary to warm within yourself zeal and thirst for “the words of eternal life” (John 6:68), through prayer, self-restraint and active archpastoral service.

And now receive this staff as a symbol of your archpastoral responsibility for the People of God, ascend the cathedra of this grand cathedral church, and make your first blessing upon the people who fervently prayed for you during Divine Liturgy, and also upon the flock that eagerly awaits you, having shared spiritually in our celebration of your episcopal consecration.

Later that day a festive reception took place with the participation of over 400 people, including many archpastors, clergymen and worshipers.

After today’s warm yet formal luncheon, Mr Sergei Vladimirovich Petrov, Consul General of the Russian Federation in San Francisco, received His Eminence Metropolitan Hilarion of Eastern America and New York and the other members of the Council of Bishops of the Russian Orthodox Church Outside of Russia, in his residence.