Metropolitan Hilarion meets with cardinal Sandri, Prefect of congregation for the Oriental Churches

Source: DECR
Natalya Mihailova | 23 September 2014
On 19 September 2014, in Amman, Jordan, where a plenary session of the Joint Commission for Theological Dialogue between the Orthodox and the Roman Catholic Churches is taking place, Metropolitan Hilarion of Volokolamsk, chairman of the Moscow Patriarchate’s Department for External Church Relations, met with the Prefect of the Congregation for the Oriental Churches, Leonardo Cardinal Sandri, a Catholic member of the Joint Commission. 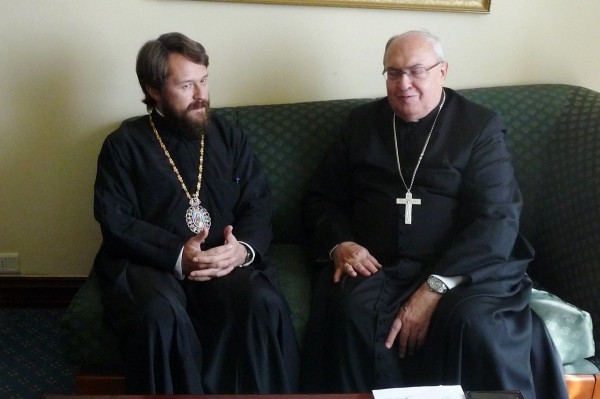 Discussed at the meeting was a worsening in relations between the Orthodox and the Greek Catholics caused by recent developments in Ukraine. Metropolitan Hilarion presented the Russian Orthodox Church’s point view on the situation. Cardinal Sandri, on his part, expressed his willingness to facilitate the process of solving the problem in relations between the two Churches.

During the meeting, Metropolitan Hilarion noted the deep concern, with which the supreme authority of the Russian Orthodox Church follows the developments in the Middle East and especially the situation of Christians in the region. The Moscow Patriarchate, in cooperation with the Russian and international organizations, is doing what is within its powers to help the Middle Eastern Christians, including the faithful of the Eastern Catholic Churches. As the DECR chairman reminded, the Patriarch of the Maronite Church, Mar Béchara Boutros Cardinal Al-Raï, visited Moscow in February 2013, at the invitation of His Holiness Patriarch Kirill of Moscow and All Russia, and in June 2014, Metropolitan Hilarion met with the Patriarch of the Syrian Catholic Church, Mor Ignatius Joseph III Younan.

Cardinal Sandri noted the great importance of the efforts made by Russia and the Russian Orthodox Church to render support to the Christian population in the Middle East. The participants in the meeting agreed that it is necessary to develop the Orthodox-Catholic cooperation in that direction.