Natalya Mihailova | 04 April 2014
April 2, 2014 – Metropolitan Hilarion of Volokolamsk, head of the Department for External Church Relations (DECR), met with a group of French religious and public figures led by Bishop Marc Aillet of Bayonne and Oloron. 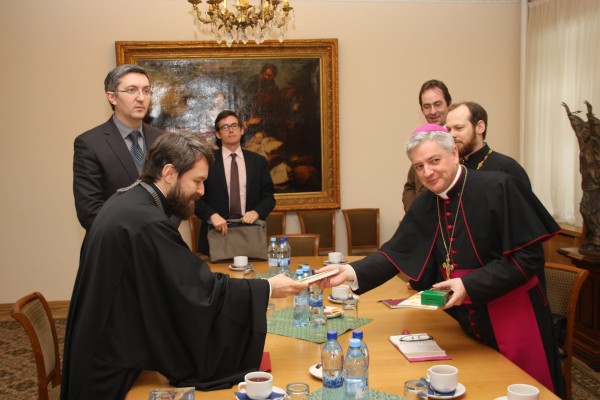 During their visit to the DECR, the French delegation was accompanied by Hegumen Philip (Riabykh), Russian Orthodox Church representative to the European international organizations in Strasbourg. Those in attendance were also Archpriest Sergiy Zvonarev, DECR secretary for far-abroad countries, and Ms Olga Mazur, secretariat for far-abroad countries.

Metropolitan Hilarion welcomed the guests to the Synodal department responsible for the Russian Orthodox Church’s external relations. He spoke about the mission of the Department and its functions today. He also expressed concern for the erosion of traditional family values in Europe, particularly in France, where a law has been recently adopted to legalize same-sex cohabitations.

The DECR chairman also expressed concern to the persecution of Christians in the Middle East and North Africa. The Orthodox faithful and world public, he said, have been especially pained by a horrific event that has happened recently at the Syrian city of Kesab where civilians from among Christians have been brutally killed. He is puzzled, he said, by the world mass media ignoring this deed of horror. The common task of Christians, according to His Eminence, is to see to it that such horrific cases are not hushed up but responded to and assessed by the world community.

Speaking on behalf of his delegation, Bishop Marc Aillet thanked Metropolitan Hilarion for the warm welcome. In his remarks, he dwelt on the work of the delegation members to support the Christian foundations of marriage.

His Eminence Hilarion answered questions from the guests. In conclusion of the meeting, he presented his guests with tokens of the meetings and wished them God’s help and success in their work which requires much strength and courage today.