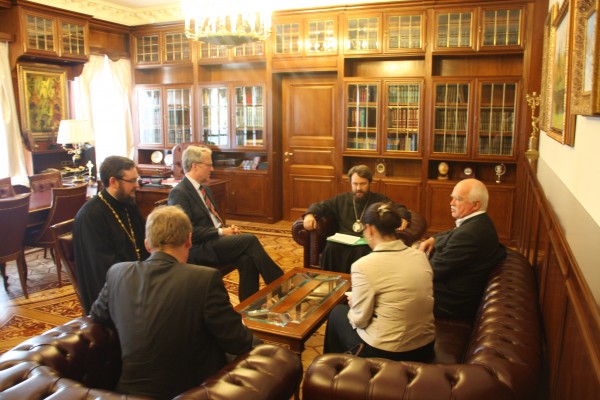 Metropolitan Hilarion also spoke about the peace efforts of the Moscow Patriarchate in overcoming the armed confrontation in Ukraine. “From the very beginning we have called to a peaceful resolution of the conflict in Ukraine and cessation of the bloodshed. We are glad that today the opposing sides have managed to reach a truce”, he said. He also informed his interlocutors that with the blessing of His Holiness Patriarch Kirill of Moscow and All Russia, in all the churches of the Russian Church a special prayer is lifted up for the assertion of peace in Ukraine. He expressed hope that the ceasefire in the east of Ukraine and the negotiations, which have started, will help come out of the prolonged armed confrontation.

Touched in the talk was also the situation of Christians in the Middle East as the actions of extremists have forced them to leave their homes en mass and to seek asylum in foreign lands. Metropolitan Hilarion expressed the stand taken by the Russian Orthodox Church with regard to the developments in that region and the wish that Western states made more efforts to protect Christians in the Middle East against the real genocide.

The ambassador, on his part, thanked the metropolitan for the opportunity to meet pointing to the great importance of traditional values for the German people. Dr. Gauweiler conveyed to the DECR chairman greetings from Germany’s parliament and expressed interest in further development of contacts with the Moscow Patriarchate.