Source: DECR
Natalya Mihailova | 27 October 2014
On October 25, 2014, Metropolitan Hilarion of Volokolamsk, head of the Moscow Patriarchate department for external church relations, met with Cardinal Edwin Frederick O’Brian, Grand Master of the Equestrian Order of the Holy Sepulchre of Jerusalem, at the parish house of the church of Our Lady the Joy to All the Afflicted. 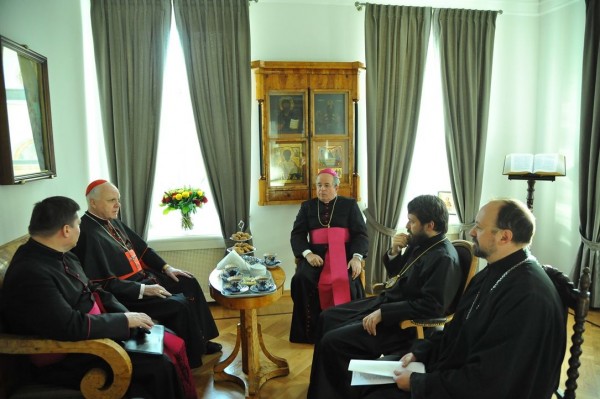 The high guest was accompanied by Archbishop Ivan Jurkovic, apostolic nuncio in Russia, Mgr Andrzej Yuzvovich, counsellor of the apostolic nunciature in Russia, and Mr. Ya. Ternovskiy, head of the delegation of the Order of the Holy Sepulchre to Russia.

The talk focused on the grievous situation of Christians in the Middle East countries engulfed in armed conflicts. Metropolitan Hilarion introduced his guest to the initiatives undertaken by the Russian Orthodox Church to give aid to the Christian population in the Middle East and pointed to the responsibility of some countries of the West for the present developments in the region.

Cardinal O’Brian, in his turn, spoke about the work of the Order of the Holy Sepulchre and its principal objective of supporting the Catholics living in the Holy Land. It is a humanitarian work expressed in building schools, hospitals and fund-raising for the Latin Patriarchate of Jerusalem. The cardinal told Metropolitan Hilarion about his meeting in Moscow with leaders of the Imperial Orthodox Palestinian Society and their mutual concern for developing cooperation between the Order and the Society in the Holy Land.

The need was emphasized to maintain closer cooperation between the Russian Orthodox Church and the Roman Catholic Church in protecting Christians in the Middle East and searching for a peaceful resolution of armed conflicts.