Metropolitan Hilarion meets with a group of Catholic clergy from France

Source: DECR
Natalya Mihailova | 12 January 2017
On January 10, 2017, Metropolitan Hilarion of Volokolamsk, head of the Moscow Patriarchate department for external church relations (DECR) and rector of the Ss Cyril and Methodius Institute of Post-Graduate Studies (CMI), met with a group of Catholic priests from France who are on a pilgrimage to Moscow and St. Petersburg. 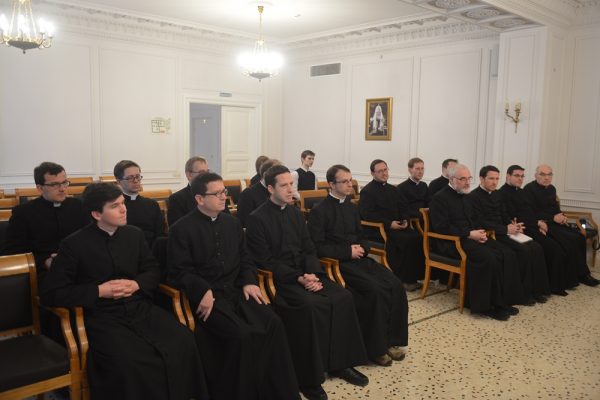 The meeting took place at the CMI assembly hall. Participating in it were also Hieromonk Ioann (Kopeikin), CMI pro-rector for training, and Miguel Palacio, head of the CMI protocol and public relations.

Metropolitan Hilarion briefly introduced the guests to the history of the CMI. A considerable part of the talk was devoted to the development of bilateral relations between the Moscow Patriarchate and the Roman Catholic Church at the present stage and in the context of the meeting between Patriarch Kirill of Moscow and All Russia and Pope Francis of Rome which took place on February 12, 2016, in Cuba. His Eminence made special stress on the importance of the two Churches’ joint efforts in the task of protecting the Christian population in the Middle East.

In conclusion of the meeting Metropolitan Hilarion answered questions from the guests.