Source: DECR
Natalya Mihailova | 10 April 2014
On 8th April 2014, Metropolitan Hilarion of Volokolamsk, chairman of the Moscow Patriarchate’s Department for External Church Relations (DECR), met with Prof. Dr. Mehmet Paçaci, head of the Foreign Relations Department of the Presidency of Religious Affairs of the Republic of Turkey, usually referred to as Diyanet. 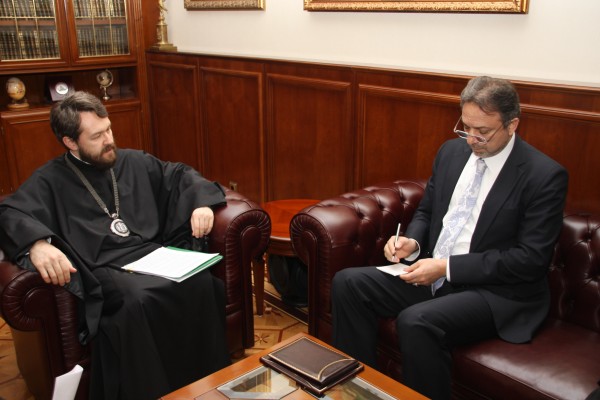 The DECR was represented at the meeting by the Revd. Sergy Zvonarev, secretary for far abroad countries; hieromonk Ioann (Kopeikin), prorector of the Ss Cyril and Methodius Institute for Post-Graduate Studies; and the Revd. Dimitry Safonov, head of the sector of inter-religious contacts. The Turkish side was represented by Mr. Ömer Faruk Savuran of the Diyanet, and Mr. Fahri Sağlik, counsellor of the Turkish Embassy to Russia.

Prof. Dr. Mehmet Paçaci arrived in Moscow as head of the Turkish delegation at the second meeting of the working group of the Russian Orthodox Church and the Diyanet.

Metropolitan Hilarion conveyed best wishes of his Holiness Patriarch Kirill of Moscow and All Russia to the Diyanet President, Prof. Dr. Mehmet Görmez.  The DECR chairman dwelt on the hard situation o Christians in the Middle East and North Africa and shared his concern over mass exodus of Christians from the region. He underscored that the destiny of Christianity in Syria arouses particular anxiety of the Russian Orthodox Church. He reminded those present that the fate of Metropolitans Paul and Yohanna abducted last April remains unknown.

The DECR chairman stated that dialogue carried on by the working group will promote concrete measures for the defence of religious minorities in the countries where they are persecuted and discriminated.

Prof. Dr. Paçaci shared his vision of the Syrian conflict, noting that the entire Syrian people, irrespective of their national or religious background, suffer from military actions. For instance, many mosques have been ruined. He also believes in the necessity of common work for opposing extremism as this work could facilitate the solution of current social problems in the Middle East.