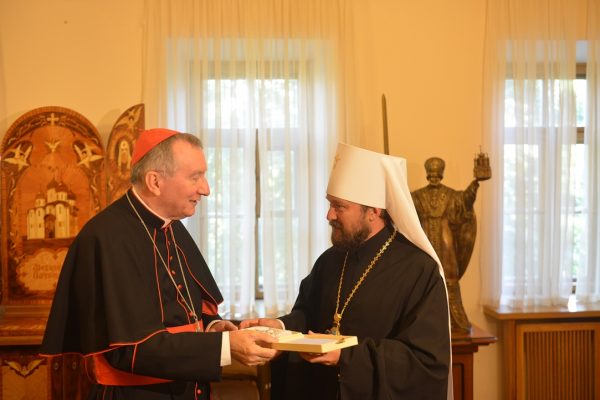 The high guest was accompanied by Archbishop Celestino Migliore, Apostolic Nuncio to Russia, Mons. Visvaldas Kulbokas of the Holy See Secretariat of the State, and Mons. Erwin Lengel, first secretary of the Apostolic Nunciature to Russia. From the DECR side there were Hieromonk Stephan (Igumnov), secretary for inter-Christian relations, and Rev. Alexiy Dikarev, DECR staff member.

Metropolitan Hilarion welcomed Cardinal Parolin and his party, telling them about the history and various areas of work carried out by the Department for External Church Relations. The sides made special reference to the importance that the historic meeting of Patriarch Kirill of Moscow and All Russia and Pope Francis of Rome in February 2016 in Havana and the bringing of a part of the relics of St. Nicholas the Wonderworker to Moscow and St. Petersburg in May-July 2017 had for the Orthodox-Catholic relations.

The talk dealt with key issues of the bilateral relations between the Moscow Patriarchate and the Roman Catholic Church in the context of today’s international situation. Metropolitan Hilarion stressed that one of the most burning problems today is the tragic situation of Christians in the Middle East. The Moscow Patriarchate has exerted every possible effort to provide the suffering population in Syria with humanitarian aid. He pointed to the important role played by the ad hoc Working Group established for cooperation with the Presidential Commission for Cooperation with Religious Associations, which includes representatives of the Russian Orthodox Church, Roman Catholic Church and other Christian confessions as well as Muslim communities.

Discussing prospects for a resolution of the Syrian Crisis, the interlocutors agreed that first of all it is necessary to put an end to terrorism in the territory of Syria and only after peace is achieved in the country its political future should be determined. Metropolitan Hilarion and Cardinal Parolin noted the usefulness of further consultations between the Moscow Patriarchate and the Holy See on the Middle East problem and the need to continue cooperation in the humanitarian sphere in this area.

The negotiations also dealt with the problem of the continued conflict in Ukraine. Metropolitan Hilarion shared his concern over Bills Nos. 4128, 4511 and 5309 aimed at discriminating against the Ukrainian Orthodox Church, which still remains on the Supreme Rada agenda, and expressed gratitude to the Holy See for its support of the stand taken by the Moscow Patriarchate on this issue.

His Eminence also pointed with regret to some cases of politicized statements and aggressive actions made by representatives of the Ukrainian Greek Catholic Church in Ukraine. The sides expressed a shared conviction that politics should not interfere in church life while Churches in Ukraine are called to play a peacemaking role and help establish a civic accord in the country.

In conclusion, the interlocutors discussed prospects for bilateral cooperation in cultural and educational spheres.

Most viewed articles
Metropolitan Hilarion of Eastern America and New York to Be Buried in Jordanville on May 22220
Patriarch Kirill: The Peoples of Russia and Ukraine Have No Interest in the Conflict186
Communion restored between the Serbian Orthodox Church and the Macedonian Orthodox Church – Ohrid Archbishopric133
Metropolitan Hilarion of Eastern America and New York Reposes in the Lord129
What Do We Celebrate at Mid-Pentecost?110
Family Life and Spiritual Warfare74
Celebrating 100 Years with Paschal Joy71
Patriarch of Serbia to Concelebrate with Archbishop Stephen of Ohrid50
Concelebration of Divine Liturgy by the Serbian Patriarch and Archbishop of Ohrid in Belgrade (VIDEO)44
China’s Internet Clampdown Is Step Closer to ‘Cancelling Christianity’40
Most popular authors
Pravmir.com team762
Ioannis Foundoulis110
Archpriest Michael Gillis74
Priest Luke A. Veronis71
Donna Birrell40