Source: DECR
Natalya Mihailova | 02 September 2014
On August 29, 2014, Metropolitan Hilarion of Volokolamsk, head of the Moscow Patriarchate’s department for external church relations, met with the Ambassador of the Republic of Lebanon to the Russian Federation, Mr. Bou Nassar. 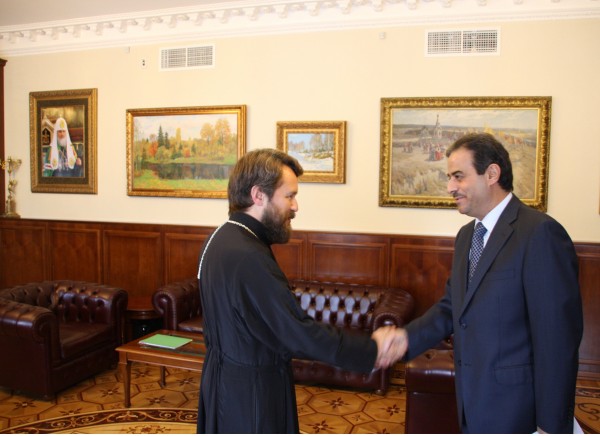 The head of the Lebanese diplomatic mission in Moscow spoke about the difficult situation in which his country has found itself in the wake of the so-called “Arab Spring” and the situation of refugees from Syria, Palestine and Iraq who have found asylum in Lebanon. Mr. Nassar informed Metropolitan Hilarion that the head of the Lebanon’s Ministry of Foreign Affairs and Emigrants, Mr. Gerban Bassil, appealed to the International Criminal Court, informing the general prosecutor of this court about crimes against humanity committed by militants in Iraq.

The sides discussed further joint efforts for preventing interreligious conflicts in the region.