Source: DECR
Natalya Mihailova | 22 December 2014
On December 20, 2014, while on a visit to Skopje with the blessing of Patriarch of Moscow and All Russia, Metropolitan Hilarion of Volokolamsk met with Macedonia’s President Georje Ivanov. Participating in the meeting was Russia’s Ambassador O. Shcherbak. 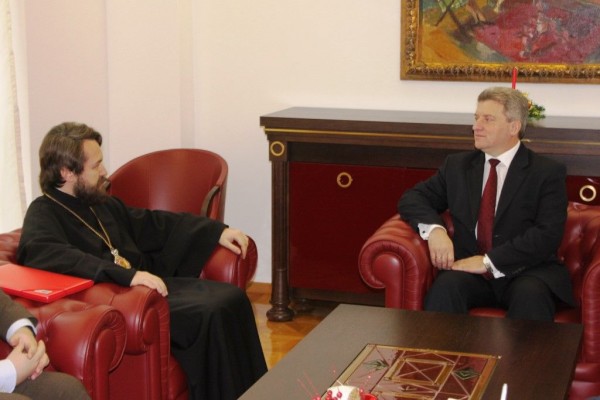 Later the DECR chairman had a talk with Prime Minister Nikola Gruevski at the Government’s residence. Participating in the talk were Macedonian Foreign Minister N. Popovski and Russian Ambassador O. Shcherbak.

On the same day, Metropolitan Hilarion met with the head of the Macedonian Orthodox Church, Archbishop Stephan of Ohrid and Macedonia. They discussed the settlement of the canonical status of this church structure which is outside communion with the world Orthodoxy.

Metropolitan Hilarion also visited the Russian embassy and had a talk with Ambassador O. Shcherbak.