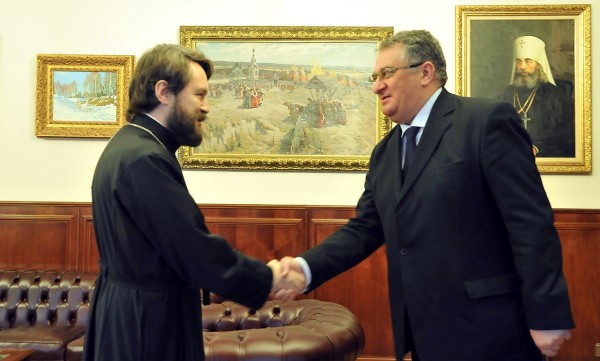 Taking part in the meeting, which was held at the Department for External Church Relations, were also archpriest Sergy Zvonarev, DECR secretary for far abroad countries, and Mr. Miguel Palacio, a staff member of the DECR Secretariat for Far Abroad Countries.

Warmly greeting the guest, Metropolitan Hilarion noted traditionally good relations between the Department for External Church Relations and the Hungarian diplomatic mission in Moscow and told about many years of his service as administrator of the Russian Orthodox Church’s Diocese of Budapest and Hungary.

The DECR chairman expressed his satisfaction over the fact that Hungary’s new Constitution emphasizes the role of Christianity and traditional moral values in the life of the country.

Mr. Balla thanked Metropolitan Hilarion for the meeting and noted the importance of contacts between the Hungarian state and the Russian Orthodox Church.

The participants in the meeting discussed topical issues of the international agenda.