Metropolitan Hilarion meets with President of the Italian Episcopal Conference

On 3rd February 2014, Metropolitan Hilarion of Volokolamsk, chairman of the Moscow Patriarchate’s Department for External Church Relations (DECR), visited Genoa with the blessing of His Holiness Patriarch Kirill of Moscow and All Russia and met with Cardinal Angelo Bagnasco, President of the Italian Episcopal Conference. 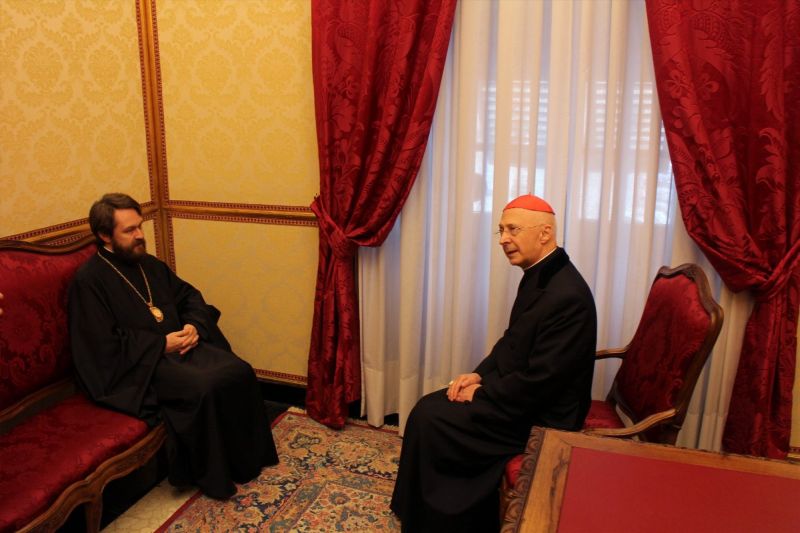 They discussed different aspects of cooperation between the Russian Orthodox Church and the Italian Episcopal Conference. Metropolitan Hilarion underscored the importance of consolidated efforts undertaken by the Orthodox and the Catholics in upholding Christian moral values in the face of the liberal secular ideology. Special attention was paid to family ethics and to the defence of Christians in the Middles East who are subject to persecution and extermination.

The DECR chairman told Cardinal Bagnasco about the revival of church life in Russia and other countries for which the Russian Orthodox Church bears canonical responsibility, and also about the revival of monastic and parish life. Cardinal Bagnasco spoke about the problems of the Catholics in Italy and expressed his hope for the extension of cooperation between the Orthodox and the Catholics.

The hierarchs exchanged views on the participation of the Russian Orthodox Church and the Italian Episcopal Conference in the Russian-Italian civil society forum-dialogue held in Rome and Trieste last November.

Metropolitan Hilarion introduced his suite which included Vladimir Yakunin and Leonid Sevastianov, co-chairman and executive director of the St. Gregory the Theologian Foundation. They told Cardinal Bagnasco about the Foundation’s work.

The President of the Italian Episcopal Conference gave diner in honour of the high guest.