Source: DECR
Natalya Mihailova | 15 September 2014
On September 14, 2014, Metropolitan Hilarion of Volokolamsk, head of the Moscow Patriarchate’s department for external church relations, met with the Minister of Endowment and Religious Affairs of the Arab Republic of Syria, Mr. Mohammed Abdul-Sattar Al Sayed, at the parish house of the church of Our Lady the Joy to All the Afflicted. Present were Syria’s ambassador to Russia, Dr. Riad Haddad, and several Syrian officials. 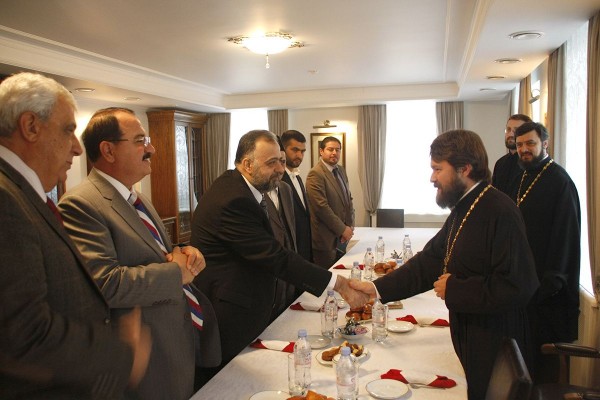 Metropolitan Hilarion welcomed the guest and congratulated him on his recent re-appointment to his high office. Pointing to the warm fraternal relations between the Orthodox Churches of Russia and Antioch, the DECR chairman said in particular,

“We are closely following the development in Syria. We sympathize with the Syrian people and help them. I have been to Syria many times and saw with my own eyes how people of different religious traditions, including Muslims and Christians of various Churches, used to live in peace and harmony in Syria. Regrettably, this harmony has been broken after your country has been subjected for a foreign aggression. Today we are aware of the suffering of Christians and people of other traditional religions in the areas occupied by terrorists.

“We realize that what is called civil war in the international language in not at all a civil war. It is exactly a foreign aggression. We know which forces try to destabilize the situation and have always warned that such interference not only in Syria but also other Middle East states will lead to trouble. We can see how the events of the so-called “Arab Spring” have spaned from one country to another, but this “spring” does not make people happy. And the actions committed by foreign invaders allegedly in the name of democracy will bring people nothing but suffering.

“We are especially concerned for the fate of the Middle East Christians who have to leave en mass their native lands. It concerns Iraq, where Christians are subjected in effect to deliberate mass genocide. It concerns Libya, Egypt and the parts of Syria controlled now by the militants. Now even Western powers have been terrified by what has been done in the Middle East with their direct assistence. When the militants of the so-called “Islamic State” capture cities, eliminate people, kill children, even in the West they begin at last to think over what is going there as a matter of fact and what is to be done next. You know, the stand of the Russian Orthodox Church, just as that of the Russian state, has not changed. From the very beginning it has been a consistent, firm and clear position. We support not a particular political force in Syria, but the Syrian people and protest against certain other countries deciding the fate of Syria and her people. We will hold this stand in the future as well.

“We grieve for the fact that in the course of aggression Christian churches and monasteries are attacked and Christian holy places are destroyed. We are concerned for the life of the two metropolitans who are missing for a year and a half now and their whereabouts is still unknown. We are deeply shocked by the tragedy of Maalula and the kidnapping of nuns of the St. Thekla Convent. We assure you once again that the Russian Orthodox Church will continue supporting the Syrian people.

“Recently we have received an alarming letter from Patriarch John of Antioch, to which we have responded, of course. We have raised over a million dollars and handed this money to the Syrian side. We maintain cooperation with the Ministry for Emergencies and with the Imperial Palestinian Society in preparing humanitarian convoys which go to Syria on a regular basis”.

Minister Mohammed Abdul-Sattar Al Sayed, on his part, conveyed a message of greeting from Syria’s President Bashar Assad to Patriarch Kirill and informed Metropolitan Hilarion of the present situation in Syria and the policy pursued by his ministry. He also introduced Tawfik al-Bouti, a son of the authoritative Syrian Islamic leader Said Ramadan al-Bouti, who was killed by a terrorist suicide bomber on March 21, 2013, at the Al Iman Mosque in Damascus.