Metropolitan Hilarion meets with US Ambassador to Russia

Source: DECR
Natalya Mihailova | 06 February 2017
On February 3, 2017, Metropolitan Hilarion of Volokolamsk, head of the Moscow Patriarchate department for external church relations (DECR), met with the US Ambassador to Russia John Tefft, at the residence of US ambassadors in Moscow. 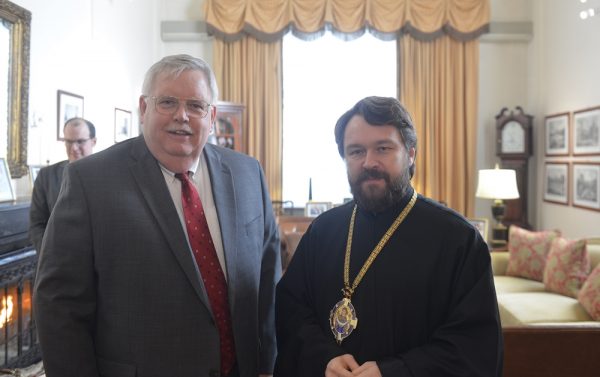 Participating in the meeting were also Archimandrite Philaret (Bulekov), DECR vice-chairman, as well as Mr. Anthony Godfrey, minister-counsellor for political affair, and Mr. David Horn of the embassy’s political section.

During the meeting, which was held in a constructive atmosphere, the sides discussed various matters of mutual concern.

Does It Matter if Jesus is…

Most viewed articles
The Eros of Marriage223
Patriarch Kirill Urges Women Not to Have an Abortion192
Shooting in Kazan – How Did God Allow Such a Tragedy? A Priest Replies175
Does It Matter if Jesus is God or Not?98
‘Pray for Peace’: a Plea from Jerusalem as Violence Continues65
Metropolitan Kirill of Kazan Visits Children Injured in the Attack on the Gymnasium57
Moleben for Peace in the Holy Land to Be Held Tomorrow in Moscow48
The Emigration of Abraham19
Most popular authors
Pravmir.com team537
Fr. Vasile Tudora223
Archpriest John Moses (+2019)98
Archpriest Lawrence Farley19