Source: DECR
Natalya Mihailova | 18 March 2016
On March 17, 2015, Metropolitan Hilarion of Volokolamsk, head of the Moscow Patriarchate department for external church relations (DECR), met with the Extraordinary and Plenipotentiary Ambassador of the Great Britain and Northern Ireland in Russia, H. E. Laurie Bristow, at the DECR. Participating in the meeting from the British diplomatic mission was Ms. Catherine McCain, second secretary of the embassy, and from the DECR – Archpriest Sergiy Zvonarev, DECR secretary for the far abroad, and Ms. O. Mazur, DECR secretariat for the far abroad. 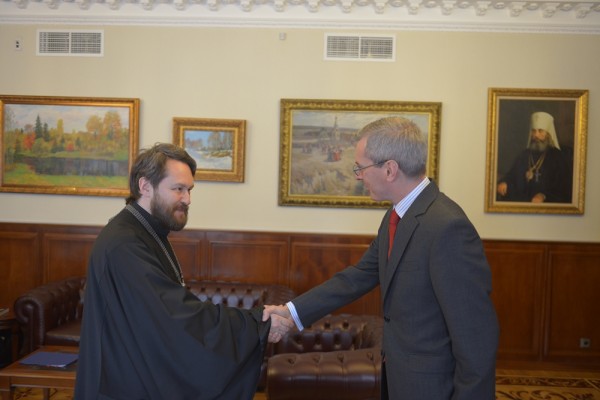 Metropolitan Hilarion welcomed the guest, congratulating him on his appointment as head of the British diplomacy in Moscow. He also expressed hope for continuation of cooperation between the British embassy and the Russian Orthodox Church. In the course of the talk, the DECR chairman spoke about the church-state relations in Russia today and interreligious dialogue.

They discussed a number of matters concerning inter-Christian cooperation as well as the problem of disastrous situation of the Christians population in the Middle East.

In conclusion of the talk, Metropolitan Hilarion presented the diplomat with a token of the meeting.