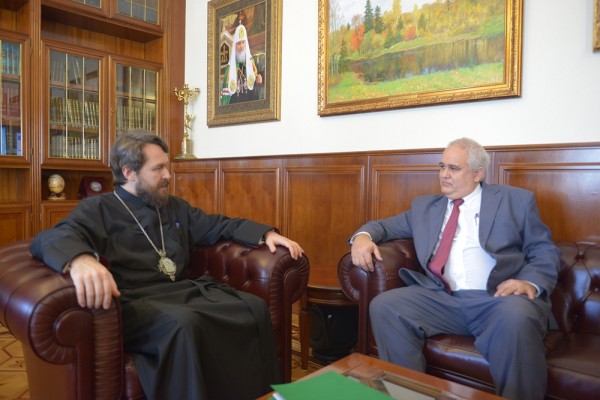 In the course of the talk, which was held in a friendly atmosphere, Metropolitan Hilarion and Ambassador Lozada Garcia discussed the current matters concerning cooperation between the Moscow Patriarchate and the Republic of Cuba. They noted the importance of the church of Our Lady of Kazan in Havana for Russian-Cuban humanitarian relations and development of religious life in Cuba. In 2008, this church was consecrated by the then head of the Department for External Church Relations of the Moscow Patriarchate, Metropolitan Kirill of Smolensk and Kaliningrad (now Patriarch of Moscow and All Russia).

At the guest’s request, the DECR chairman informed him about the situation in eastern Ukraine and the state of the Ukrainian Orthodox Church of the Moscow Patriarchate.

They also considered items for the common agenda.