Metropolitan Hilarion meets with Minister of Foreign Affairs of Lebanon 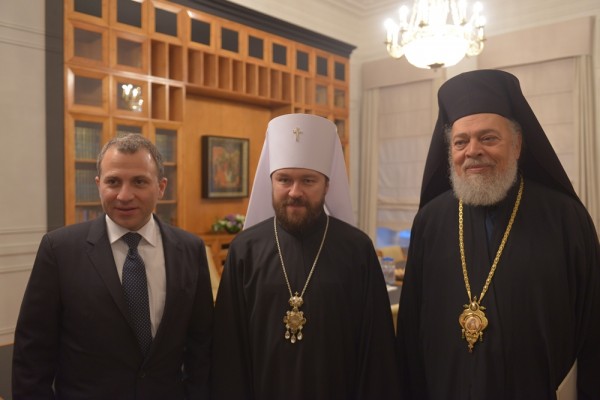 They were joined in the meeting by Mr. Jean Aziz, adviser to the minister, Ms. Nana Fayssal, adviser on mass media; Metropolitan Nifon of Phillippopolius, representative of the Patriarch of Antioch and All the East to the Patriarch of Moscow and All Russia; archpriest Sergey Zvonarev, DECR secretary for far abroad countries; Ms. Olga Mazur of the same secretariat; and Mr. Markin of the MFA Department for the Middle East and North Africa.

Metropolitan Hilarion warmly greeted the high guests at the premises of the Ss Cyril and Methodius Institute of Post-Graduate Studies and told them about this educational institution and also about the international conference “Prince Vladimir. Choice of Civilization” being held in Moscow in which the Primate of the Russian Orthodox Church took part. The DECR chairman expressed hope for the development of contacts between the Moscow Patriarchate and the Lebanese side in the field of education.

Minister Bassil thanked Metropolitan Hilarion for the meeting and spoke about his visit to Moscow. Also, he shared his opinion on the current events in the Middle East.

The DECR chairman expressed his concern about the situation in the region, saying that it is necessary to form an effective international coalition that could fight terrorism and also a coalition of religious leaders and creative public forces that could make a contribution into countering terrorist threats.

Participants in the meeting agree that it is necessary to defend Christians who are killed or ousted from the Middle East and also to keep Christian presence in the lands of the Bible that has determined civilization of the entire region.

Metropolitan Hilarion expressed condolences to the Lebanese foreign minister over terrorist attack in the suburb of Beirut on November 12 and presented a letter with condolences from His Holiness Patriarch Kirill of Moscow and All Russia addressed to the speaker of the Chamber of Deputies, H. E. Nabih Berri.

Other issues of mutual interest were also discussed.