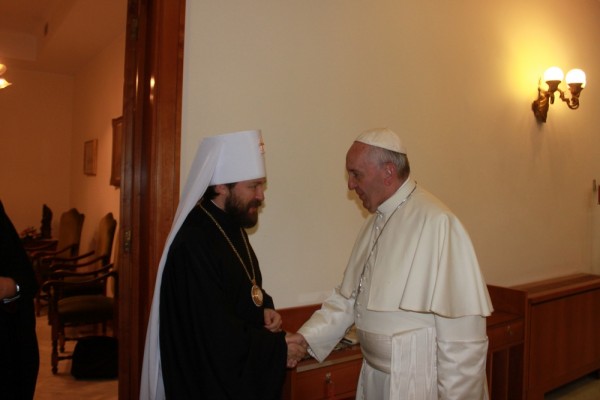 Pope Francis thanked Metropolitan Hilarion for greetings he brought to the 14th Ordinary General Assembly of the Synod of Bishops of the Catholic Church and conveyed his best wishes to His Holiness Patriarch Kirill of Moscow and All Russia.

Discussed were topics on the agenda of bilateral relations of the Roman Catholic Church and the Moscow Patriarchate, as well as the situation in the Middle East, where Christians have been persecuted by the terrorist groups.

Gifts were exchanged after the talk which was held in the atmosphere of mutual understanding and was interpreted by Rev. Hyacinthe Destivelle of the Pontifical Council for Promoting Christian Unity,

That same day the DECR chairman met with Cardinal Kurt Koch, President of the Pontifical Council for Promoting Christian Unity.