Source: DECR
Natalya Mihailova | 11 March 2016
On March 10, 2016, Metropolitan Hilarion of Volokolamsk, head of the Moscow Patriarchate department for external church relations (DECR), met with the chairman of the Central Muslim Board in Russia (CMBR), Sheikh ul-Islam Talgat Tadjuddin, at the Ss Cyril and Methodius Institute of Post-Graduate Studies (CMI). 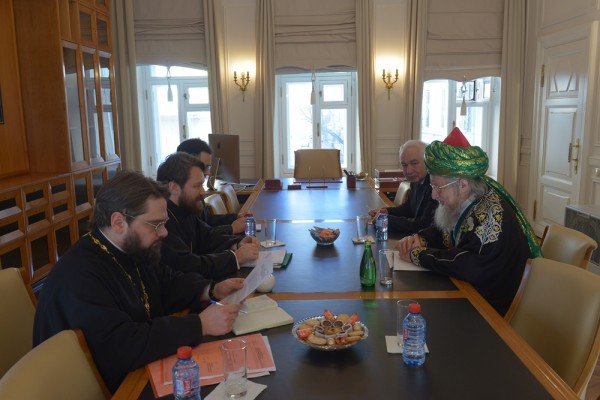 Among the attendees were the Rev. Dimitry Safonov, head of the DECR section for interreligious contacts, Mr. Sh. Kadyrgulov, CMBR representative in Moscow, and Mr. S. Melnik of the Interreligious Council in Russia secretariat.

Among the matters discussed were the forthcoming visit of His Holiness Patriarch Kirill of Moscow and All Russia to the Republic of Bashkortostan and problems involved in the development of religious education in Russia. Metropolitan Hilarion and Sheikh ul-Islam Talgat Tadjuddin pointed to the need to give young people an opportunity for receiving a high-quality education within Russia, in Russian theological schools, which have preserved rich centuries-old traditions – a major factor of opposing pseudo-religious extremism. Sheikh ul-Islam Talgat Tadjuddin informed Metropolitan Hilarion of the plans for developing an Islamic academy in Tatarstan’s Bolgar.

The two religious leaders expressed hope that the cooperation among people of traditional religious will continue developing the spirit of good-neighborliness and mutual understand in the service of consolidating civic accord and public welfare.