Metropolitan Hilarion: Metropolitan Vladimir was a vivid example of selfless service to the Church

I was grieved to learn about the demise of His Beatitude Metropolitan Vladimir of Kiev and All Ukraine.

His Beatitude Vladyka Vladimir was one of the oldest and most esteemed hierarchs of the Russian Orthodox Church. His primatial service became a real epoch in the life of the Ukrainian Orthodox Church and, undoubtedly, wrote many marvelous pages in her history.

His Beatitude Metropolitan Vladimir was elected to the See of Kiev in a very hard time for the Ukrainian Church, when her canonical unity underwent serious ordeals. Since the first days of his new ministry, he was steering the church ship with a firm hand towards the salutary harbour of Christ. We are greatly indebted to Metropolitan Vladimir’s deep wisdom, pastoral experience, courage, and fortitude for the preservation of the unity of the Russian Orthodox Church and for the wellbeing and prosperity that the Ukrainian Orthodox Church has achieved.

During the time when His Beatitude headed the See of Kiev, the Ukrainian Orthodox Church adorned herself with hundreds of new churches and monasteries, and her flock increased. However, Vladyka Vladimir’s chief merit was an ability, in any situation and regardless of the spirit of this world, to uphold the integrity of the church being in its fullness, to unite archpastors, pastors, and all the faithful. 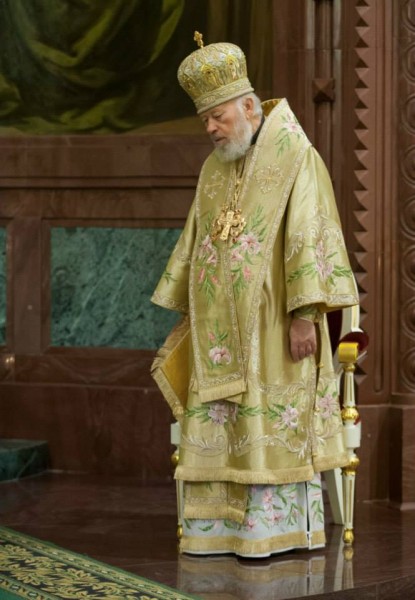 The good shepherd giveth his life for the sheep (John 10:11). By his personal piety, steadfast will to the truth, and all-covering, inexhaustible love to all those who came to him, His Beatitude strengthened his flock in faith, taught them to be patient in sorrows, and guided Christians to the highest hope of new life in Christ.

I used to meet with His Beatitude Metropolitan Vladimir in my official capacity and on numerous occasions. We had warm, trust-based relationships. Metropolitan Vladimir enjoyed high spiritual authority among the hierarchs of the Russian Church and was a vivid example of selfless service to the Church. I am sure that all those who had a pleasure to meet with him, cherish in their hearts joyful and reverential memory of those meetings.

I wholeheartedly pray to the All-Merciful Lord for the repose of the soul of his faithful servant, asking God to grant the deceased Metropolitan Vladimir a reward in the everlasting life for his ministry to Him and His people, and for his pious life and the faithfulness to the Holy Church.