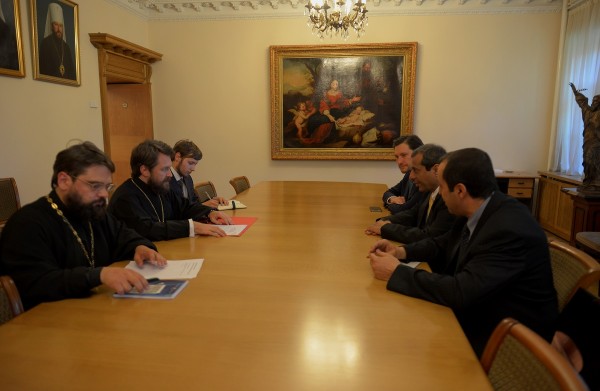 Taking part in the meeting, which was held at the DECR premises, were Damir Mukhetdinov, deputy chairman of the Spiritual Administration of Muslims of the Russian Federation, interpreter A. Darvish, Revd. Dimitry Safonov, head of the DECR secretariat for inter-religious contacts, and Ilya Kashitsyn of the same secretariat.

Discussed at the meeting was the situation in the Middle East and North Africa. The DECR chairman said that the Church was concerned about the destiny of Christians in the region and expressed is anxiety over the mass exodus of Christians from Syria, Iraq and Libya, and also about the hard humanitarian situation in the places where Christian refugees reside.

Metropolitan Hilarion noted the importance of cooperation of religious and political leaders in opposing extremism and in defence of human rights. He told the guests about the contacts of the Moscow Patriarchate with the Muslim communities in different countries and noted the special relevance of inter-religious dialogue.

Ambassador Abdulrahman Ibrahim Al-Rassi shared his vision of the situation in the Middle East region and described various aspects of international activity of the Kingdom of Saudi Arabia.