Metropolitan Hilarion of Volokolamsk Meets with French Ambassador to Russia 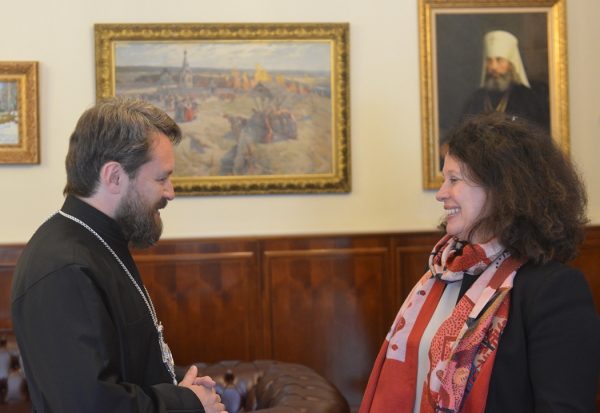 On 1 June 2018, Metropolitan Hilarion of Volokolamsk, chairman of the Moscow Patriarchates Department for External Church Relations (DECR), met with H.E. Sylvie Bermann, Ambassador Extraordinary and Plenipotentiary of the French Republic to the Russian Federation, accompanied by two staff members of the Embassy.

Metropolitan Hilarion warmly greeted the guests and at the request of Ms Bermann told them about the current situation in Ukraine and the ministry of the Ukrainian Orthodox Church which finds herself under the pressure of politicians and nationalists. He said: “We exert all possible efforts for saving the unity of our Church.”

DECR chairman explained the current situation of the Russian Orthodox Church which is the Church of Russia and also of other countries on her canonical territory. He told the French Ambassador about the thirty recent years of the revival of the Church that can be seen in the restoration of the old churches and monasteries and construction of the new ones, and about the experience of spiritual care for compatriots living abroad.

Another topics of the talk were a dialogue of the Russian Orthodox Church with traditional religious communities at home through the activity of the Interreligious Council of Russia and the relations between the Russian Orthodox Church and the Roman Catholic Church, the main event having been the meeting of His Holiness Patriarch Kirill with Pope Francis in Havana in February 2016.

Metropolitan Hilarion touched upon such topics as sociology of religion pertaining to the number of Orthodox Christians in Russia; the work in the sphere of catechization and religious education aimed at the increasing in the number of people with the experience of church life; as well as cooperation between the Church and the state; and the attitude of the Church to sects and destructive religious structures.