Source: DECR
Natalya Mihailova | 20 October 2015
On 18 October 2015, Metropolitan Hilarion of Volokolamsk, chairman of the Moscow Patriarchate’s Department for External Church Relations (DECR), arrived in Athens with the blessing of His Holiness Patriarch Kirill of Moscow and All Russia to take part in the Conference on “Religious and Cultural Pluralism and Peaceful Coexistence in the Middle East.” 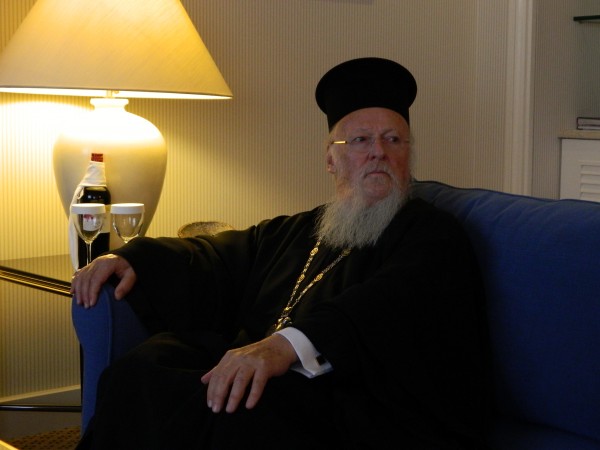 In the morning of October 19, Metropolitan Hilarion met with His Holiness Patriarch Bartholomew of Constantinople who arrived in Athens to attend the conference.

They discussed the results of the 5th Pan-Orthodox Pre-Council Conference which completed its work in Chambesy near Geneva on October 17. Metropolitan Hilarion underscored that the Russian Orthodox Church had taken an active part in the process of preparation for the Pan-Orthodox Council and attached great importance to the thorough elaboration of draft documents.

The DECR chairman shared with His Holiness Patriarch Bartholomew his profound concern about the situation in Ukraine where schismatics have seized over twenty churches of the canonical Orthodox Church and where there were cases of assassination and violence against clerics of the Ukrainian Orthodox Church. Metropolitan Hilarion said he was perplexed by the actions of bishops of the Ukrainian structures of the Ecumenical Patriarchate in the USA and Canada in support of schismatics.

Taking part in the meeting were archimandrite Bartholomew (Samaras), chief secretary of the Holy and Sacred Synod of the Ecumenical Patriarchate; Rev. Dimitry Safonov, head of the DECR section for interreligious contacts, and Rev. Anatoly Churyakov, a DECR interpreter.