Source: DECR
Natalya Mihailova | 19 June 2015
On 17 June 2015, the Moscow Patriarchate’s Department for External Church Relations (DECR) housed a joint meeting of the representatives of the Russian Orthodox Church and a Holy Kinot’s special commission on the preparation for the 1000th anniversary of Russian monasticism on the Holy Mountain of Athos. 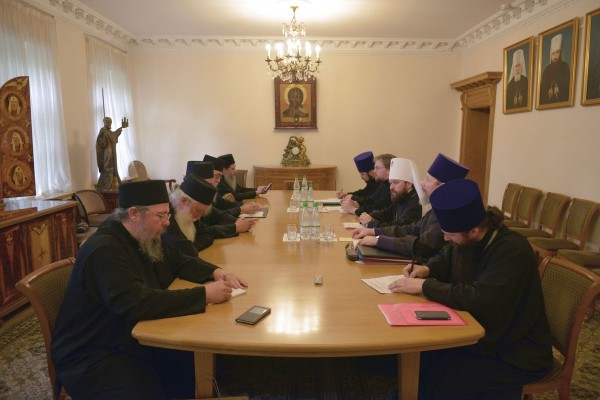 The participants discussed the process of preparation for the 1000th anniversary of Russian monasticism on Mt. Athos and outlined steps for development of the Russian-Athonite relations.

In the evening, the participants visited the Museum of Russian icon, where they were welcomed by its director, Nikolai Zadorozhny, and met with Mr. Alexander Beglov, Presidential envoy in the Central Federal district.

After the meeting, in which Metropolitan Hilarion of Volokolamsk also took part, members of the commission visited the Metochion of Mt. Athos, venerated holy relics, and head a talk with the rector, hegumen Nikon (Smirnov). In the church dedicated to the Athonite saints, they sang hymns in the Greek language.