Source: DECR
Natalya Mihailova | 11 April 2016
On 6 April 2016, Metropolitan Hilarion of Volokolamsk, chairman of the Moscow Patriarchate’s Department for External Church Relations, met with students of the Higher Diplomatic Courses of the Diplomatic Academy of Russia’s Ministry of Foreign Affairs. The meeting took place at the Cathedral of Christ the Saviour in Moscow with the blessing of His Holiness Patriarch Kirill of Moscow and All Russia. 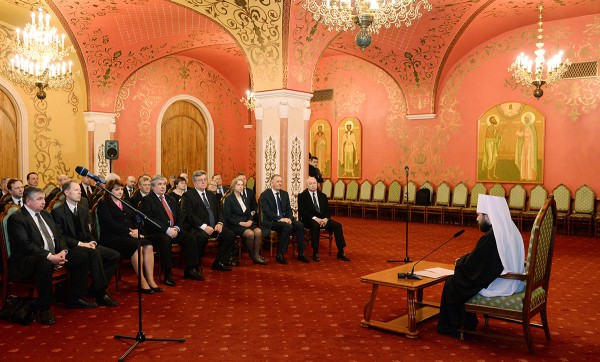 Photo: Photo by S. Vlasov, Press Service of the Patriarch of Moscow and All Russia/ G. Kalin, Diplomatic Academy of Russia’s Ministry of Foreign Affairs

Taking part in the meeting were Russia’s newly appointed ambassadors, consuls general and envoys, as well as staff members of Russia’s Ministry of Foreign Affairs and the Diplomatic Academy.

The Department for External Church Relations was also represented by Mr. Miguel Palacio, a staff member of the Secretariat for Far-Abroad Countries.

Metropolitan Hilarion of Volokolamsk told all those present about the external activities of the Russian Orthodox Church.

Having raised the topic of inter-Orthodox relations, he spoke on the preparation of the Pan-Orthodox Council, due to take place in the island of Crete in June 2016. Six following documents were drafted to be discussed at the Council: “The Sacrament of Marriage and Its Impediments,” “The Importance of Fasting and Its Observance Today,” “The Relations of the Orthodox Church with the Rest of the Christian World,” “Autonomy and the Means of Proclaiming It,” “The Mission of the Orthodox Church in Today’s World,” and “The Orthodox Diaspora.”

Speaking on how Orthodoxy is present in various countries, Metropolitan Hilarion emphasized the importance of cooperation between the Russian Orthodox Church and the Russian embassies and consulates, as well as with the Rossotrudnichestvo centers and the Russian World Foundation.

During the meeting, the DECR chairman mentioned that the work was being carried out to prepare the celebrations marking the millennium of Russian monasticism on Mount Athos.

Addressing the diplomats, Metropolitan Hilarion noted the significance of the meeting, first in history, between the Patriarch of Moscow and All Russia and the Pope of Rome. “The meeting revealed a high level of unanimity between Orthodox and Catholic Christians on social and moral issues,” His Eminence said, “His Holiness Patriarch Kirill and Pope Francis did not discuss theological or dogmatic issues dividing our Churches, nor did they try to conciliate their viewpoints on these topics. There were neither common prayers nor divine services. The rapprochement only related to social and moral issues.”

The main topic discussed at the meeting of the heads of the Russian Orthodox and the Roman Catholic Churches was the tragic situation in the Middle East where the very existence of Christianity is under threat now due to persecutions, the archpastor noted.

Under the circumstances, interfaith dialogue is becoming a top priority, the hierarch of the Russian Orthodox Church pointed out. “Terrorist use religious rhetoric and slogans, often presenting conflicts as interfaith confrontations or claiming that they fight for faith,” the DECR chairman said, “We always say that religion cannot contain destructive inhumane ideas. Therefore, if terrorists use religious slogans as a cover and justify their crimes by faith, they do it unlawfully.”

As Metropolitan Hilarion pointed out, the Russian Islamic leaders are unanimous in denouncing terrorists’ actions in the Middle East. “Interfaith dialogue carried out in our homeland is a very good example of how it can and should develop in other countries and regions of the world,” His Eminence said. The major institution regulating cooperation between traditional religions in Russia is the Interreligious Council of Russia. The honorary chairman of the Interreligious Council is His Holiness Patriarch Kirill of Moscow and All Russia.

To conclude the meeting, Metropolitan Hilarion answered questions from the audience.

Most viewed articles
The Parish Church: Family or Restaurant?251
What Is Rejected Becomes the Cornerstone107
1600 Children Baptized in Tbilisi with the Blessing of Patriarch Ilia98
His Beatitude Patriarch Theophilos III and bishops of the Russian Church Abroad attend a concert marking the 150th anniversary of the birth of Sergei Rachmaninoff in Jerusalem77
Hierarch of the Jerusalem Patriarchate Speaks in Support of His Holiness Patriarch Kirill74
Utah Church Prepares, Welcomes All for Consecration60
The Savior of the Hopeless, or Is It Possible to Be a Good Person and Not Be Saved?56
Supreme Court Overturns Roe v. Wade in Mississippi Abortion Ruling23
Most popular authors
Pravmir.com team307
Archpriest Lawrence Farley251
Archpriest John Moses (+2019)107
Alexander Tkachenko56
CBN News23