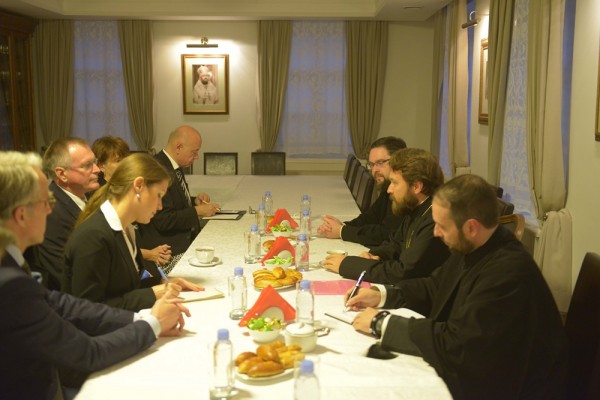 They were joined in the meeting, which took place at the presbytery of the Church of ‘Joy to All the Afflicted’ icon of the Mother of God in Moscow, by H.E. Rüdiger von Fritsch-Seerhausen, Ambassador Extraordinary and Plenipotentiary of the Federal Republic of Germany to the Russian Federation; Mr. Alexander Troche of the Bundestag Protocol Service; Mr. Klaus Hackenschmid, head of the Vice-President’s Secretariat; Ms. Annika Bolten-Drutschmann, head of protocol section of the German Embassy; Ms. Ruth Singhammer, the Bundestag Vice-President wife; Ms. Christina Boerger, interpreter of the Embassy; archpriest Sergy Zvonarev, DECR secretary for far abroad countries; and hierodeacon Roman (Kiselev) of the same secretariat.

Metropolitan Hilarion warmly greeted the high guests and his suite. In the beginning of the talk he spoke of the hard situation of Christians in the Middle East and North Africa and of the problem of refugees flooding to the European continent from the region due to external intervention into internal affairs and destabilization of social and political situation in the Middle East countries. Metropolitan Hilarion expressed his wish for the Western countries and for the entire world community to exert more practical efforts to defend suffering Christians in the region.

Metropolitan Hilarion told the guests about peacemaking efforts of the Moscow Patriarchate exerted for the resolution of military confrontation in Ukraine. He noted the importance of maintaining spiritual unity of the Russian and Ukrainian people which dates back to the baptismal font of the holy Prince Vladimir Equal-to-the-Apostles and expressed his hope that ceasefire in the South-East of Ukraine and the ongoing political talks will facilitate the end of civil confrontation.

The DECR chairman also told the guests about relations of the Russian Church with different confessions in Germany, including cooperation in the “Churches in Europe” working group of the “St. Petersburg Dialogue” Russian-German Forum.

The Vice President of Bundestag thanked Metropolitan Hilarion for the meeting and noted that his visit to Russia was taking place on the days marking the 25th anniversary of German unity.

Metropolitan Hilarion presented the guests with his book, “Patriarch Kirill. His Life and World Outlook,” which was published in German with the “St.Petersburg Dialogue” assistance.