Source: DECR
Natalya Mihailova | 22 October 2015
On 19 October 2015, Metropolitan Hilarion of Volokolamsk, chairman of the Moscow Patriarchate’s Department for External Church Relations (DECR), arrived in Rome with the blessing of His Holiness Patriarch Kirill of Moscow and All Russia to attend as an observer from the Russian Orthodox Church the plenary session of the 14th General Assembly of the Synod of Bishops of the Catholic Church on the “Vocation and Mission of the Family in the Church and in the Contemporary World.” 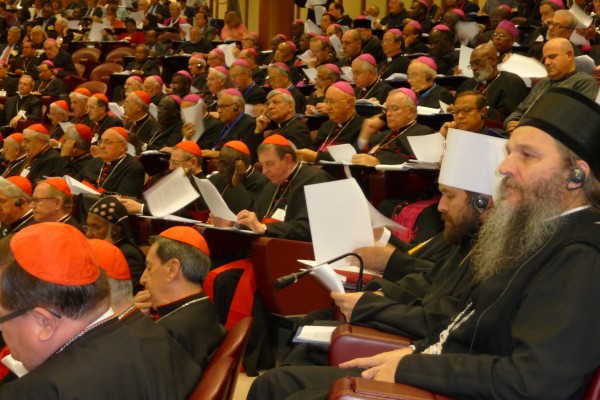 Metropolitan Hilarion was met at the airport by H.E. Alexander Avdeyev, Ambassador of the Russian Federation to the Holy See; archimandrite Antony (Sevryuk), secretary of the Administration of the Moscow Patriarchate’s parishes in Italy; Rev. Hyacinthe Destivelle of the Pontifical Council for Promoting Christian Unity; and Rev. Alexiy Dikarev of the DECR Secretariat for Inter-Christian Relations.

On October 20, at the Paul VI Audience Hall in Vatican City where the Synod holds its sessions, the plenary session chaired by Pope Francis opened with Metropolitan Hilarion’s greetings. Speaking about challenges and threats to the family in the contemporary world Metropolitan Hilarion underscored that the Christian Churches should “seek out answers to them, proceeding from the mission that Christ has placed upon them – to bring humanity to salvation” and regretted that certain communities, which call themselves Christian, distort the teaching on the family and marriage under the influence of the secular world and are prepared to abandon their Christian identity. Under the circumstances the position of the Catholic and Orthodox Churches which remain faithful to the traditional teaching on the family “should be ever more strengthened and unanimous. We should defend it jointly both within the framework of dialogue with the legislative and executive branches of power of various countries, as well as in the forums of international organizations to ensure by all means possible that the family is legally protected.”

Greeting Metropolitan Hilarion during the session were Pope Frances; Cardinal Pietro Parolin, State Secretary of the Holy See; Cardinal Bechara Al-Rai, Patriarch of the Maronite Church; Cardinal Kurt Koch, President of the Pontifical Council for Promoting Christian Unity; Archbishop Vincenzo Paglia, President of the Pontifical Council for the Family; other members of the Synod, as well as representatives of the Non-Catholic Churches and communities.

Attending the Synod’s sessions are observers from the Patriarchates of Constantinople, Moscow, Serbia and Romania, the Orthodox Church of Albania, the Coptic and Jacobite Syrian Churches, the Anglican Communion; the Lutheran World Federation, the World Methodist Council, the Christian Church (Disciples of Christ), the Baptist World Alliance and the World Evangelical Alliance.

The 14th Ordinary General Assembly of the Synod of Bishops of the Catholic Church will complete its work on October 25.