Source: Interfax religion
Natalya Mihailova | 20 October 2014
Moscow, October 20, Interfax - Metropolitan Hilarion of Volokolamsk, the head of the Synodal Department for External Church Relations, has discussed the situation in Ukraine with Pope Francis in the Vatican. 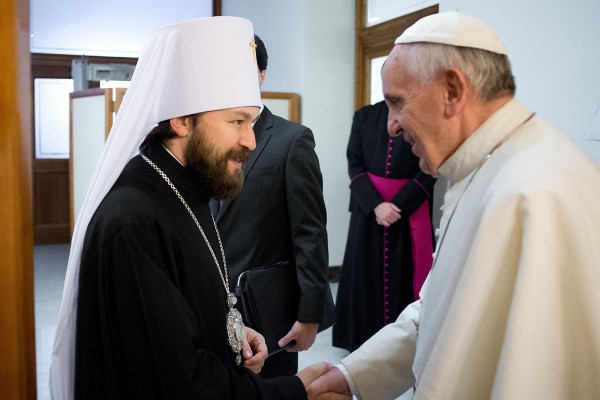 “The head of the Department for External Church Relations shared with the pontiff his deep concerns about the involvement of the Ukrainian Greek-Catholic Church in the political conflict on the side of the forces that are hostile to the Russian Orthodox Church, expressing the hopes that the Greek-Catholics will reconsider their position and will stop making one-sided politicized statements and will stop supporting the schism,” the press service for the DECR reported.

The metropolitan also told the pope about the situation in eastern Ukraine, where three clergymen have been killed and some fifty churches have been partially or fully destroyed.

In his recent speech at the General Assembly of the Synod of Catholic Bishops in the Vatican, Metropolitan Hilarion asked the Greek-Catholics to stop “making any statements on political issues and any visible forms of sporting the schism, and also stop calling for the creation of ‘a unified local Church of Ukraine.'”

The Uniates, or Greek-Catholics, are part of the Roman Catholic Church, but they conduct their church services according to the Byzantine rite, which is similar to the Orthodox rite. The Uniates’ positions are especially strong in Western Ukraine, where a number of serious conflicts between the Uniates and Orthodox Christians took place in the 1990s.

The tensions in the relations between Orthodox Christians and Uniates in Ukraine is one of the reasons that has prevented a meeting between the head of the Russian Orthodox Church and the pope for many years.