Source: DECR
Natalya Mihailova | 27 December 2016
On December 25, 2016, Metropolitan Hilarion, head of the Moscow Patriarchate department for external church relations (DECR), commemorated those who died that day in a plane crash over the Black Sea, during the Divine Liturgy at the church of Our Lady the Joy to All the Afflicted in Moscow. 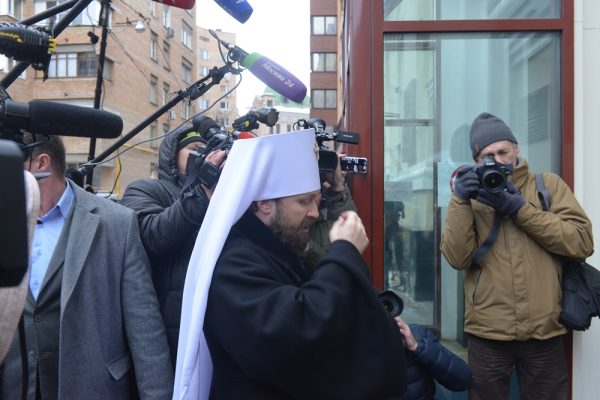 On Sunday morning a tragic news came about the crash of a TU-154 plane of the Russian Defense Ministry carrying 92 people including the crew, the Russian Army Alexandrov Song and Dance Ensemble performers, journalists as well Elizaveta Glinka, a renowned benefactor popularly known as ‘Doctor Liza’.

In his homily after the liturgy, the archpastor said:

‘In the beginning of the Liturgy I said that a sad news came when we just began the worship. Now this news has been confirmed. The names of those who were onboard the crashed plane are published. We know these names and among them are people who are close to us.

‘I would like to remember my very close friend – Lieutenant-General Valery Khalilov. For many years he conducted the orchestra during parades in Red Square. Those of you who saw the parades on the square or on television could hear that orchestra which consisted of over one thousand people. I myself, when I served in the army, played in this orchestra and participated in four parades. For many years Valery Mikhailovich was the Russian Army chief conductor. He directed this enormous team. And in the recent years he was the chief director of the Russian Army Song and Dance Ensemble, a famous and legendary team. He was flying on that plane together with a large group of the ensemble members. There was also his assistant, Constantine Mayorov, the father of one of the choristers of our church. There was also Elizaveta Glinka, known as ‘Doctor Liza’, who made a great deal of charitable actions, taking care of the sick and the dying. These people were flying to Syria to greet our servicemen there and to distribute humanitarian aid.

‘A tragedy has happened, and it is becoming already clear that apparently there are no survivors. So let us pray for the repose of all those who died, so that the Lord may give consolation to their relatives, so that He may give rest and the Heavenly Kingdom to all those who have passed so suddenly to eternal life’.

Then His Eminence presided over the prayer for the repose of the victims of the plane crash.

Speaking with journalists, His Eminence said,

‘I would like to express my most sincere and heartfelt condolences to the wife and all the relatives of Valery Khalilov, a long-standing chief conductor of the Russian Army, a man I was tied with by a long and warm friendship. Nine years ago, Valery Mikhailovich performed my ‘Christmas Oratorio’ at the Basilica of the National Shrine in Washington. It was the first performance of that composition. Together with Valery Mikhailovich and the Defense Ministry orchestra we made of a tour of several cities in America. Since then we were tied by very warm friendship’.

Noting that it was difficult to believe the morning report about the tragedy, the hierarch said that it became a personal grief for one of the choristers in the church in Ordynka Street: in the list of the victims of the crash is his father, Constantine Mayorov, one of the managers of the Alexandrov Ensemble.

‘We in the church lifted up a prayer for the repose of all the innocent victims who were on board of that plane’, His Eminence continued.

Speaking about Elizaveta Glinka, who died in the plane crash, the archpastor stressed, ‘She is a person who has done very many good things. Her memory will stay in the hearts of many people’.

‘I would like to express condolences to all those who have lost their loved ones in this tragedy. May the Lord repose their souls in the dwellings of the righteous, the place where there is no disease, neither sorrow, nor crying, but endless life. Eternal memory be to them!’ Metropolitan Hilarion said.