Source: DECR
Natalya Mihailova | 22 December 2014
On 19 December 2014, Metropolitan Hilarion of Volokolamsk, chairman of the Moscow Patriarchate’s Department for External Church Relations, while on a visit to the Bulgarian Orthodox Church with the blessing of His Holiness Patriarch Kirill of Moscow and All Russia, arrived in the city of Veliko Tarnovo. 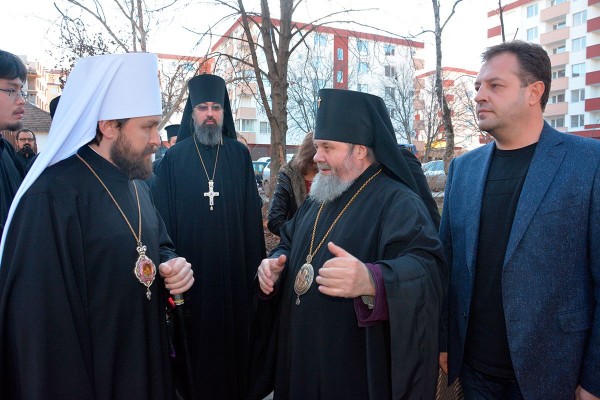 Upon his arrival, the DECR chairman was met by Metropolitan Grigory of Veliko Tarnovo. The archpastors together proceeded to the Cathedral dedicated to the Resurrection of Christ and the Holy Great Martyr George the Victory-Bearer, the largest functioning church in the city. It is situated in the Park “Ruski Grobishta”. There is a cemetery in the park, where Russian soldiers, who had died fighting for the liberation of Bulgaria during the Russo-Turkish war of 1877-1878, were buried. Mr. Daniel Panov, Mayor of Veliko Tarnovo, greeted the guests.

At the cathedral, Metropolitan Hilarion celebrated the rite of the blessing of the bells, which were made in Russia with donations from Mr. Alexei Ananiev and Mr. Pavel Novoselov. With the blessing of His Holiness Patriarch Kirill of Moscow and All Russia, the bells were presented to the Diocese of Veliko Tarnovo of the Bulgarian Orthodox Church.

Metropolitan Gregory of Veliko Tarnovo greeted Metropolitan Hilarion, saying in particular, “We are very glad that the chairman of the Department for External Church Relations of the Moscow Patriarchate has come here to bless the bells for our church. We are also pleased that you, dear Vladyka, have visited this place commemorating the liberation of our country. Bulgaria is a small country (some dioceses of the Russian Orthodox Church are larger than the whole Bulgaria), however, the majority of monuments commemorating the greatness and heroic deeds of our liberators, are located here.” The Church of the Resurrection of Christ has been built as a symbol of friendship between the two nations; the lower church is dedicated to the Great Martyr George the Victory-Bearer, heavenly patron of soldiers.

A spiritual and cultural centre in honour of Metropolitan Cyprian of Kiev is also being constructed in Veliko Tarnovo, Metropolitan Gregory said.

“It is with a special feeling that I am visiting Veliko Tarnovo, capital of the Second Bulgarian Kingdom, an ancient city, which for several centuries was the centre of the Bulgarian Orthodox Church, the centre of the Patriarchate of Tarnovo. I am proud to visit this place commemorating the Russian soldiers who laid down their life and shed their blood for the liberation of Bulgaria in 1877-1878. Much time has passed since then; yet, these heroes have not been forgotten, just as the Bulgarian Orthodox Church has not forgotten Tsar Alexander the Liberator, praying for him during every Divine Liturgy.

“Today we have prayed in this newly constructed Church dedicated to the Resurrection of Christ and St George, commemorating the soldiers who laid down their lives and, we believe, did not die but were granted resurrection and the Heavenly Kingdom. Their heroic feat is in our hearts and in the hearts of all Orthodox faithful of the Bulgarian people.”

The archpastors said a prayer for the repose of the souls of those buried in the mass grave, and prayed at the monument to “The Grandfathers and Fathers Who Died for the Liberation of Bulgaria in 1877-1878,” erected by the Russian emigrants in 1922.