Source: DECR
Natalya Mihailova | 01 December 2016
On 30 November 2016, Metropolitan Hilarion of Volokolamsk, chairman of the Moscow Patriarchate’s Department for External Church Relations, visited the Embassy of the Republic of Cuba in Moscow and met with Ambassador Emilio Losada Garcia to express condolences over the death of Fidel Castro Ruz. 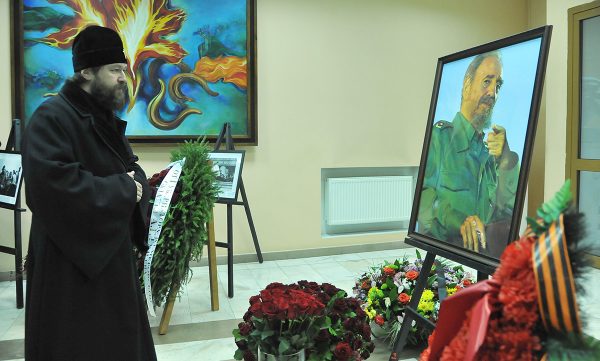 “On behalf of His Holiness Patriarch Kirill of Moscow and All Russia and on my own behalf I express cordial condolences to the leaders of Cuba and to all Cuban people over the death of Commandante Fidel Castro. His Holiness sent a letter of condolences to his brother, General Raul Castro Ruz, Chairman of the State Council and Council of Ministers, saying that Comandante Fidel became a legend of the country.”

The DECR chairman noted that there was no single man in Russia who did not know the name of this man. Indeed, friendship between our nations and the Russian people’s respect for the Cuban people are linked with the years when every Soviet citizen knew the name of Fidel Castro.

Metropolitan Hilarion added that His Holiness Patriarch Kirill feels special feelings to Cuba as he visited the island many times and met with Fidel Castro. The construction of a Russian Orthodox church in the centre of Cuba’s capital was completed with personal participation of Fidel Castro.

“It was not fortuitous that Havana was chosen for historical meeting of the Patriarch of Moscow with the Pope of Rome as it was His Holiness Kirill’s firm decision. During his stay in Havana His Holiness met with Commandante Fidel for the last time. I would like to express my sympathy to all of you and also my wish for the upholding of friendly relations between the Cuban and Russian people.”

Ambassador Garcia thanked the DECR chairman for his kind warm words and assured him that the Cuban leaders would continue to strengthen friendly relations and develop fruitful cooperation between the Russian Orthodox Church and Cuba’s government.

“On behalf of His Holiness Patriarch Kirill of Moscow and All Russia I express cordial and sincere condolences to the leaders of Cuba and to all Cuban people over their hard loss – the demise of Commandante Fidel Castro, a symbol of the Cuban people’s struggle for independence, the leader of Cuba for over half a century. His name is known to everybody in Russia. The Russian Orthodox Church is grateful to him for his participation in the construction of the church dedicated to the Kazan Icon of the Mother of God in Havana, a place where our compatriots living in Cuba can meet with God and with one another. I wish us to keep in our hearts a good feeling of friendship and mutual respect between the Cuban and Russian people developed largely thanks to the deceased Cuban leader.”

Fidel Castro Ruz, 90, died on November 25, 2016. Nine days of mourning were declared. He will be buried in Santiago de Cuba on December 4.