The history of the Church has developed in such a way that Christians have failed to preserve church unity. In various times, falling away from the Church were individuals and whole communities, and in today’s world there are various groups who call themselves Christians.
Natalya Mihailova | 30 July 2014
On July 27, 2014, Metropolitan Hilarion of Volokolamsk spoke at the closing of the GAIDPARK-2014 summer debate camp at Vinogradovo near Moscow. The event was organized by the Yegor Gaidar Foundation, a non-commercial organization, in cooperation with the Polytechnic Museum. 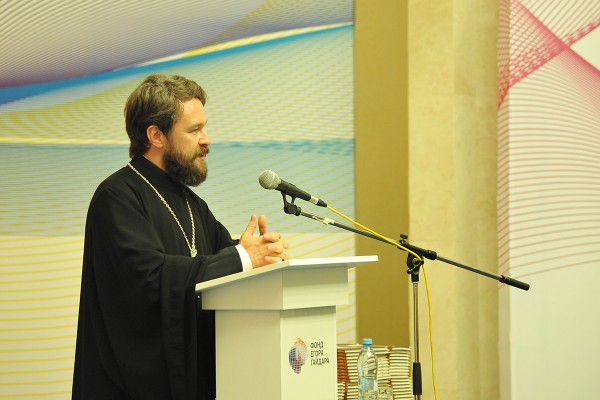 Since July 20, over one hundred university post-graduates from various cities in Russia have attended lectures given by prominent experts in economics, sociology genetics and urbanistics and held debates on the future of the individual, society, city and civilization.

As the organizers asked Metropolitan Hilarion find a way to motivate students for making the right choice of their profession and lifestyle he spoke first about his own experience and motive for joining the Church. “At a certain stage in one’s life one comes to face a dilemma between a life for the good of others and a life for one’s own self. Paradoxically as it may seem, those who do not spare themselves for the sake of others, giving themselves, their material resources, their intellectual and spiritual abilities for the welfare of other people, feel happy. They give without losing anything, and the more they give the more they gain. As Christ said, ‘Seek first the Kingdom of God and, and all these things shall be added to you’”, he said.

The metropolitan’s discourse about life and its meaning and quality and the importance for one to make the right choice of one’s profession and way of life provoked a lively interest of the audience. He was asked numerous questions. Among them was a question about the Orthodox Church’s cooperation with other Christian confessions, especially the Catholic Church and Protestantism. He answered: “We have both conflicts and cooperation. The history of the Church has developed in such a way that Christians have failed to preserve church unity. In various times, falling away from the Church were individuals and whole communities, and in today’s world there are various groups who call themselves Christians. Some of them are close to one another, while others are fairly far away from one another. I believe the Catholics and the Orthodox generally are close in basic doctrinal principles and ethics.

“But there are, of course, historical circumstances, which in some cases provoke conflicts. For instance, in western Ukraine today, the actions of the Uniates have provoked an acute inter-confessional conflict. But still it is a conflict of local nature. If we speak of relations on the global level, I would describe them as positive on the whole. We have many things in common. We have common approaches to many problems and seek to cooperate wherever possible”.

Answering a question about the Russian Orthodox Church’s cooperation with the Russian education system, Metropolitan Hilarion said, “In our country, the Church is separated from the state but she is not separated from the society and the people, hence from the educational process. There are now some 50 higher education institutions which have theological faculties or departments with clergy on the teaching staff. For instance, I am the head of the Chair of Theology at the Moscow State University of Nuclear Physics. We are not going to penetrate anywhere, nor do we initiate the establishment of such chairs of theology. Normally, it happens at a university’s initiative. It is certainly very important for us that children at schools should have the knowledge of religion. That is why we welcomed the decision to introduce to schools Basic Religious Culture and Secular Ethics as a culturological discipline taught by secular teachers”.

One of the students raised a question about atheism as the mainstream of today’s society. Metropolitan Hilarion expressed the conviction that it was the religious component in people’s life that can be considered mainstream. He noted that for the last quarter a century, 25 thousand churches were built, that is, a thousand churches a year or three churches a day. “It is in itself shows that it is religion that is in the mainstream, not atheism”.