Source: DECR
Natalya Mihailova | 29 September 2016
On 29 September 2016, with the blessing of His Holiness Patriarch Kirill of Moscow and All Russia, Metropolitan Hilarion of Volokolamsk arrived in Baku to take part in the 5th Baku International Humanitarian Forum. 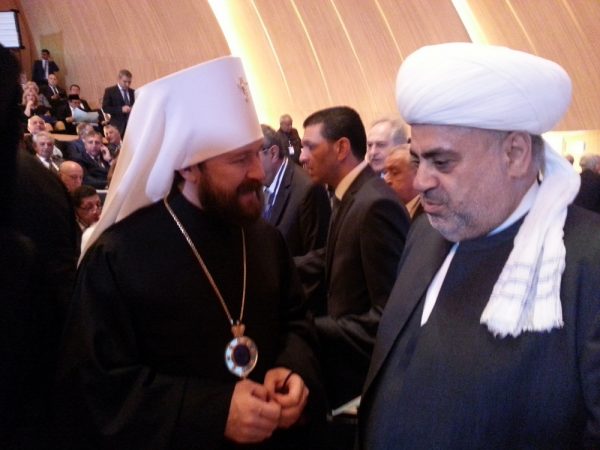 He was met at the local airport by Archbishop Alexander of Baku and Azerbaijan; Rev. Dimitry Safonov, DECR secretary for interreligious relations; Mr. A.V. Barkov, counselor of the Embassy of the Russian Federation in Azerbaijan; and Mr. D. Imamaliyev, counselor of Azerbaijan’s Embassy in Russia.

Before the forum, Metropolitan Hilarion warmly greeted Sheikh-ul-Islam Allahshuqur Pasha-zade, chairman of the Caucasus Muslim Board.

The conference brought together over nine hundred people from eighty countries. Among those representing the Russian Federation were Ms Olga Golotets, Deputy Prime Minister; Mr. Anatoly Torkunov, rector of the Moscow State Institute of International Relations; Mr. Yefim Pivovar, rector of the Russian State University for the Humanities, board chairman of the Russian-Azerbaijani Friendship Society; as well as high officials, Nobel laureates and heads of international organizations.

Ms Olga Golodets read out a message of greetings from the Russian President Vladimir Putin.

The international organizations, such as the United Nations, the UNESCO, and the Organization of Islamic Cooperation, also conveyed their greetings to the participants in the conference.

In his speech, Metropolitan Hilarion dwelt on today’s major global challenges, including extremism, terrorism, and ignorance in religious matters, as well as on the ways to respond to them.

Addressing the participants in the forum, the leader of Muslims of Azerbaijan noted the great importance of peacemaking efforts of the Russian Orthodox Church and Patriarch Kirill personally, aimed at resolving the conflict over Nagorno Karabakh.

Among those who will speak at the forum on September 30, will be Mr. Vladimir Legoyda, chairman of the Synodal Department for Church-Society and Media Relations, and Rev. Dimitry Safonov, DECR secretary for interreligious relations.