Metropolitan Hilarion: the feat of new martyrs and confessors is a spiritual treasure to be carefully preserved and revered by our Church

On February 10, 2013, the Day of the Assembly of Russia’s New Martyrs and Confessors, Metropolitan Hilarion of Volokolamsk, head of the DECR, celebrated the Divine Liturgy in the church of Our Lady the Joy to All the Afflicted in Moscow.

After the service, Metropolitan Hilarion delivered a sermon, saying in particular,

‘We commemorate today the Assembly of Russia’s New Martyrs and Confessors – all those who martyred in the years of severe persecutions against the faith and the Church of Christ. It is a great occasion for the whole Church as we remember tragic events but at the same time celebrate because the era which continued in our country for 70 years in the 20th century also revealed to the world a great assembly of confessors and new martyrs. They preferred dying to renouncing Christ and today they pray for us and our Motherland in the triumphant heavenly Church. 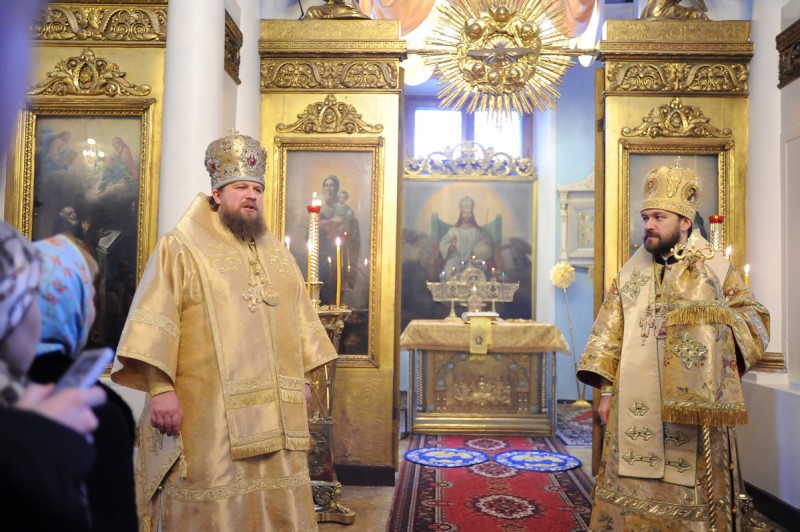 ‘The persecution started immediately after the 1917 October Revolution when the Bolsheviks took over. The persecution against the faithful was purposeful and long and excelled in cruelty all the previous persecutions against the Church including those by Roman emperors in the 1st, 2nd and 3d centuries. The theomachist regime did everything to destroy religion and the Church, her people and those who bore the grace-giving spirit of Christ that used to nourish our Motherland for centuries.

‘It was a brutal and bloody repression because the authorities sought to fully exterminate the Church. They proceeded from the utterly fantastic and antihuman idea that religion was a vestige of the past and should die out on its own, but if it did not die on its own it should be helped to die as soon as possible.

‘The Bolsheviks created an antihuman and criminal ideology to guide the rulers of our country for decades. This ideology led to millions of victims, the people of different beliefs and social status. They began with the class struggle against nobility and merchants followed by the dispossession of well-to-do peasants, then resettlement and destruction of whole ethnic communities. One destruction campaign followed the other and these criminal actions continued for several decades.

‘The Russian Orthodox Church was only one of the targets of that suicidal campaign waged by the authorities against their own people. But it was the Church who showed great courage and spiritual heroism, which has been imprinted in people’s memory and glorified by the Church today by canonizing Russia’s holy new martyrs and confessors.

‘The machine of persecution swallowed not only innocent people but also those who themselves were guilty of the crimes. Indeed, persecutors are known to become persecuted sometimes. We do not see any heroism in the actions of these people in the awareness that they were victimized by the world they themselves created. Those whom we glorify were not guilty of anything except for their faith in Christ, their service of the Church, their love of God and their efforts to guide the people of God to salvation. The people we glorify as Russia’s new martyrs and confessors are not all the victims of those terrible years but those who remained faithful to the Lord to the end, who were not broken by the machine of repression, who did not renounce Christ even under torture and in prison, who did not betray their loved ones, as was often the case.

‘We do not know how many they were, tens of thousands, hundreds of thousands or millions, because the whole truth about those years will never be revealed. All the archives will never be opened so that the records could reveal who remained faithful to the end and who stumbled. Besides, there are many forgeries in the transcripts of interrogation we use to restore the story of a particular new martyr. Some recorded as renouncers did not actually renounce their faith. The full story of the feat performed by the saints is known to the Lord alone. But the Church has glorified all the new martyrs and confessors, those we know, those whose feat is documented and those who are known only to God. Among them were bishops and ordinary priests and monastics. There were also a great many lay people who did not renounce Christ even under torture.

‘The feat performed by holy new martyrs and confessors is a spiritual treasure to be carefully preserved and revered by our Church. We do not know what times await us ahead. It is wrong to believe that the Church will now and forever enjoy welfare, peace and the good will of the powers that be, because times may change as it happens in history. Our Orthodox Church lived in very different situations and there always were those who were ready to follow to the end the path of Golgotha together with Christ. We pray today that the grace of God may never abandon our people, as it happened after a great many of them rejected the faith, Christ and the Church. We pray that this rejection may never be repeated in our history. We pray that we may hand down to our posterity the Orthodox faith we have inherited at such a dear price’.