Metropolitan Hilarion: The Lord Gives Each of Us an Opportunity to Get Near the Kingdom of Heaven Here, On Earth 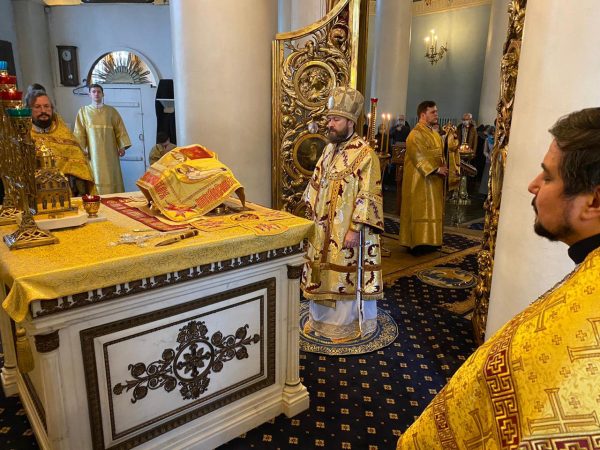 On October 18, 2020, the 19th Sunday after Pentecost, the feast day of the Synaxis of Moscow Saints, Metropolitan Hilarion, Chairman of the Department for External Church Relations of the Moscow Patriarchate, officiated a Divine Liturgy at the Church of Joy Of All Who Sorrow Icon of the Mother of God in Moscow, reports the website of the DECR.

At the end of the liturgy, the archpastor delivered a sermon:

I congratulate all of you, dear fathers, brothers, and sisters, on this Sunday.

Today I would like to tell you a few words about the parallel universe. Recently, I watched a TV show where various scientists, doctors of sciences, professors, astrophysicists were talking about how and where the universe came from. One of the scientists said that, of course, the universe came from a big bang: something exploded there and it began to fly apart. This happened 13.8 billion years ago. Another scientist objected: it was nothing of the kind, there was no big explosion, but there were several explosions, first one, then another, third, fourth, and then everything began to fly apart. The third scientist argued that they got it all wrong: at first, in a fraction of a second, everything exploded, began to fly apart, but then it slowed down. This hypothesis is called the “inflationary model of the universe” [i.e. Inflation Theory – Tr], when the universe first exploded and then slowed down.

All these people, with solid diplomas from the most famous universities, talked about how the universe came about, but none of them, of course, could answer the question: if there was an explosion, what exploded then, and most importantly, who blew it up?

Is there a parallel universe? Of course there is. This is a spiritual world, which is inhabited not by some imaginary aliens or humanoids, or creatures, which are sometimes written about in science fiction books, and sometimes scientific theories say that such creatures exist. The parallel universe, which opens up to us, is inhabited by angels, saints, and the departed: the people who, having finished their earthly journey, crossed into another world after they crossed the threshold of death.

We each have a parallel universe. We come into contact with it when we turn to God in prayer, when we participate in church sacraments, when we invisibly feel the presence of angels at divine services, or when we feel that there are people next to us who have already passed into another world.

Two parallel universes coexist and mutually intersect. There is interpenetration between them, they are not isolated from one another. And in earthly life we ​​have the opportunity to come into contact with a parallel spiritual world.

A non-believer is able to perceive only the universe in which we are, only the material world. And behind the material world he does not feel, does not see and does not know the reality of the spiritual world, in contrast to a believing person who not only believes that somewhere in heaven there is some kind of good beginning, but lives a religious life, prays, participates in the sacraments of the church. And the believer has no doubts about the existence of a parallel universe. The only question is how to name it.

Of course, we do not know when our world appeared – 13 billion 800 million years ago, as scientists calculated, or earlier, or maybe later. But we know that our world was created by God and that if the universe is really expanding, which is just one of the hypotheses, it is because it has an engine – God. And even if the universe originated from a big bang or several explosions, then all of this had to be started by someone, and God is the One who launched this movement.

Why is it so important for us to know that there is a parallel universe? Because sooner or later we will all be there. Often, people fear death and what awaits them beyond the threshold of death. But we have a precious and unique opportunity right now, in earthly life, to get in touch with another world, where we all will one day be.

Today we listened to the story of Apostle Paul about how he was caught up to the third heaven and heard unspeakable words that cannot be conveyed in human language. What does the apostle tell us? And why does he talk about this, if even in human language it is impossible to describe what he came in contact with in the spiritual world, which he called the third heaven?

Apostle Paul tells us about the reality of spiritual, church, and religious life, about the reality of contact with another world. This reality was felt and seen by Saint Andrew the Fool, when during the divine service he saw the Most Holy Virgin praying for the people and covering the city with Her honest omophorion. We also come into contact with this reality when we pray to the Lord, the Most Holy Theotokos and the saints, when we feel the presence of angels and the departed during a divine service.

The Lord gives each of us an opportunity to get near the Kingdom of Heaven, to the very least, and anticipate the bliss that awaits those who love God in eternal life, while we are here on earth, even if we are not taken to the third heaven and hear unspeakable words. This is why we love and value worship. That is why we come to the temple of God and every time we partake of the Holy Mysteries of Christ, we feel that we have joined eternal life, a different existence, the eternal origin.

Let us treasure this special experience that the Lord gives us in worship, in the Sacraments of the Church, in the communion of the Holy Mysteries of Christ. Let us ask the Lord to give us the strength to join the spiritual world and prepare ourselves for the transition to another world that awaits each of us. Amen.

A blessed feast to all of you!”