Metropolitan Hilarion: the Russian Church is compelled to set up her parishes in the African continent 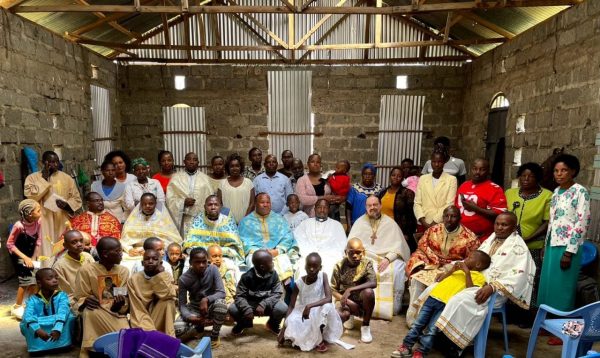 The clergy and parishioners of the Church of Holy Great Martyr Catherine in Nairobi, Kenya. Photo: t.me/exarchleonid

“Christians in Africa need to be protected by Russia and the Russian Orthodox Church, not of her own free will but by perforce. It has set up a Patriarchal Exarchate in Africa in order to offer a canonical asylum for African clergy who did not wish to follow the Patriarch of Alexandria in recognizing and legitimizing the Ukraine schism”, Metropolitan Hilarion of Volokolamsk, Chairman of the Department for External Church Relations of the Moscow Patriarchate, stressed.

The establishment of a Patriarchal Exarchate for Africa was a forced measure, the metropolitan noted, “No incursion from our side was made into the canonical boundaries of the Orthodox Church of Alexandria, as we simply responded to the requests of African clergy”.

“In the Orthodox Church, the clergy and the faithful face a simple choice: Are you with the canonical Church or with schismatics? African clergy now have to make this choice”, the hierarch said.

Earlier, when there was the Eucharistic communion between the two Churches, in the Russian Church, the Russian-speaking believers living in Africa were advised to come to churches of the Patriarchate of Alexandria. “Now, regrettably, we cannot say this to them because the Patriarchate of Alexandria has associated itself with schismatics. Accordingly, now we have to set up our own parishes for our Russian-speaking communities- the parishes of the Russian Orthodox Church”, Metropolitan Hilarion stated.