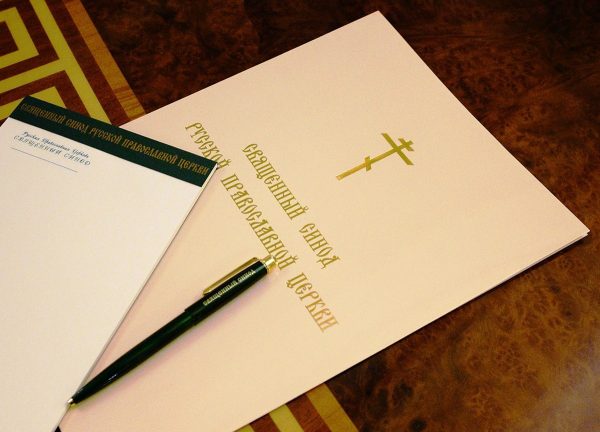 The Holy Synod of the Russian Orthodox Church issued the following statement:

“The Holy Synod of the Russian Orthodox Church considers it necessary to respond to the attempts made in the document to distort the true reasons and circumstances for the formation of the exarchate.

The decision of the Moscow Patriarchate is explained in the communique by “the fact of the recognition of the autocephaly of the Ukrainian Orthodox Church” by His Holiness Patriarch Theodore of Alexandria.

Such a statement is based on a deliberately false thesis, since the Ukrainian Orthodox Church both existed and still exists as an independent part of the Russian Orthodox Church in its management. The Ukrainian Church did not ask for and did not receive any autocephaly. On the contrary, it resolutely rejected the process of granting the so-called tomos of autocephaly, imposed on her from the outside and supported by the then state authorities of the country and schismatics. This was repeatedly and publicly stated in the official statements of the Council of Bishops and the Synod of the Ukrainian Orthodox Church, in the speeches of its archpastors, clergy, monastics and laity, the vast majority of whom wished and still wish to maintain unity with the Moscow Patriarchate.

The so-called autocephaly was granted by the Patriarchate of Constantinople not to the canonical Ukrainian Orthodox Church – the largest confession in Ukraine, currently numbering 108 bishops, 12,381 parishes, 12,513 clergy, 260 monasteries and 4,630 monastics – but to a group of schismatics who had fallen away from it and continue to be at enmity with it. It was these people, who did not have the legal consecration and grace of the priesthood, and their like-minded followers that the Patriarchate of Constantinople, contrary to the canons, formed the “autocephalous church” from. And it was this schismatic structure, which is without God’s grace, that His Holiness Patriarch Theodore of Alexandria entered into communion with.

The Holy Synod of the Russian Orthodox Church notes with sorrow the distortion of Orthodox ecclesiology manifested in the implementation of the scenario of the so-called Ukrainian autocephaly. However, this distortion was not allowed by the Russian Church, as stated in the communiqué of the Synod of Alexandria. It is found in the acts of the Patriarchate of Constantinople, which illegally invaded Ukraine, as well as in the statements of its high representatives. Attempts to appoint the first Primate according to the diptych, as “the first without equal” in the Orthodox Church, who supposedly has the exclusive right to grant and withdraw autocephaly at his own discretion, to tear away parts of the Local Churches, to unilaterally revoke documents more than three hundred years old, to single-handedly cancel judicial decisions of the Councils of Bishops of other autocephalous Churches to arbitrarily “restore” to the holy rank of persons who had never had it, are an undoubted deviation from the patristic teaching about the Church and the centuries-old Orthodox Tradition.

Members of the Holy Synod of the Russian Orthodox Church remember the speeches of the Primates of the Orthodox Church of Alexandria in support of the canonical Church in Ukraine in the bosom of the Moscow Patriarchate, including the statements of His Holiness Patriarch Theodore, which he repeatedly made in the past until recently. As His Holiness testified in an interview in 2016, he has always taken “the position that the Ukrainian Church is an integral part of the Russian Orthodox Church.” In 2018, while visiting Odessa, the Primate of the Patriarchate of Alexandria encouraged the faithful to be loyal to “the canonical Church of Ukraine, headed by His Beatitude Metropolitan Onuphry.”

However, on November 8, 2019, His Holiness Patriarch Theodore unexpectedly announced his recognition of the Ukrainian schismatic group, began commemorating its leader at divine services, and on August 13, 2021 entered into direct Eucharistic communion with him.

As is known, the recognition by His Holiness Patriarch Theodore of the schismatic structure in Ukraine caused rejection, including within the Alexandrian Orthodox Church itself. Many of its clergy publicly spoke out in defense of the canonical Ukrainian Church, declared their disagreement with the obviously illegal decision of their Primate, and did not want to be in canonical submission to the one who embarked on the path of schism.

For two years, the Russian Church did not respond to the appeals of the African clergy that came to it, but patiently expected that His Holiness Patriarch Theodore would change his mind. However, during this time, His Holiness did not limit himself to commemorating the head of one of the Ukrainian schismatic groups in diptychs of the Orthodox Primates, but entered into Eucharistic communion with him and other “hierarchs” of this structure. These mournful events convinced the Holy Synod of the Russian Orthodox Church of the need to respond to the appeals received and to form, under these exceptional circumstances, a Patriarchal Exarchate in Africa.

Such a difficult decision, taken in the situation of the recognition of the Ukrainian schismatics by the Patriarch of Alexandria, is in no way an expression of a claim to the canonical territory of the ancient Church of Alexandria, but pursues the only goal – to give canonical protection to those Orthodox clerics of Africa who do not want to participate in the lawless legitimization of the schism in Ukraine.

We call on His Holiness Patriarch Theodore II of Alexandria and the archpastors of the Most Holy Church of Alexandria to stop supporting the Ukrainian schism and to return to the canonical path in order to preserve the unity of Holy Orthodoxy.”