Metropolitan Hilarion: Unification of the Orthodox and the Catholics is out of the question 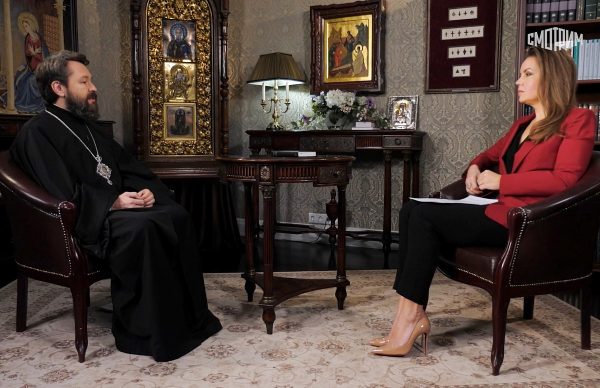 In the beginning of December, Pope Francis of Rome, during his meeting with Archbishop Ieronymos II of Athens and All Greece, uttered the words, which many perceived as apologies to the Orthodox for mistakes made in history by the Catholics. In particular, he said, “Worldly concerns poisoned us, weeds of suspicion increased our distance, and I say shamefully, I acknowledge that decisions of the Catholic Church had nothing to do with Jesus and the Gospel”.

Yekaterina Gracheva, the hostess of the Church and the World TV program, asked Metropolitan Hilarion of Volokolamsk, Chairman of the Moscow Patriarchate Department for External Church Relations, whether these statements were steps on the way to the unification of the Orthodox and the Catholics and whether this unification is possible.

“Nobody speaks of the unification of the two Churches, because the divisions have existed for a very long time; many contradictions have accumulated – in effect, the two Churches have lived independent lives for almost ten centuries”, Metropolitan Hilarion noted, “There are differences in understanding the fundamental Christian dogmata on the veneration of saints issue. For instance, there are those who are venerated as saints in the Orthodox Church but not acknowledged as such in the Catholic Church, and there is a host of Catholic saints not acknowledged by the Orthodox Church. Therefore, unification is out of the question, but what can be the point is for us to put an end to the situation of rivalry, competition, enmity, which has been there for many centuries”.

The DECR chairman recalled that the much-discussed statements made by Pope Francis are far from being the first apology made to the Orthodox by Pontiffs of Rome. These words were pronounced by his predecessors as well; they expressly spoke about numerous mistakes made by the Catholics with regard to the Orthodox.

Among these mistakes His Eminence Hilarion mentioned violence used at times with regard to the Orthodox, as well as the creation of unia, which still serves as a dividing factor for believers. “Actually, the Catholics tried to use various ways to convert by right and wrong Orthodox Christians to Catholicism. And among these ways was unia, when the Orthodox were allowed to preserve their liturgical rite, while being obliged to join the Catholic Church fully adopting the Catholic doctrine, including the doctrine on the universal jurisdiction of the Pope of Rome”, Metropolitan Hilarion said explaining the essence of Uniatism.

He said that unia is actually a deception, since many Orthodox believers, when becoming Uniates, had not even suspected that they were changing their faith. Indeed, outwardly everything remained as it used to be – the church vestments were the same; the prayers at the Liturgy were the same; the church singing was the same.

“When Patriarch Kirill met with Pope Francis in Havana, they made a joint declaration that stated: unia is not a method for achieving unity”, His Eminence reminded the audience, “It is a very important statement coming from the mouth of the Pontiff of Rome”.

As for the statement made by Pope Francis the other day in Greece, it can be considered an important contribution to the normalization of Orthodox-Catholic relations, while the unification of the Churches is altogether out of the question either on the official or non-official level, the DECR chairman emphasized.

Most viewed articles
The Trap of Religiosity90
Faith and Moral Freedom83
Patriarch Kirill: “The Memory of the New Martyrs will Help Us to Be Faithful to Christ amid Modern Temptations”81
Bishop Nicholas of Manhattan visits Holy Cross Monastery in West Virginia79
Lord, Save Me!68
Patronal Feast Celebrated in St. Anna Convent in Vashkivtsi43
Condolences of Patriarch Kirill over the death of believers in the fire that broke out in Abu-Seifein Church in Cairo38
25 Years of Help: the Ship-Church Goes On its 25th Voyage to Distant Villages29
St. Tikhon Church to host Liturgical Music Symposium in October 202228
Most popular authors
Pravmir.com team298
Vasileios Stoyiannos90
Archpriest Michael Gillis83
Fr. Theodore Stylianopoulos68