Pope Francis Asked Forgiveness for the Mistakes of Catholics 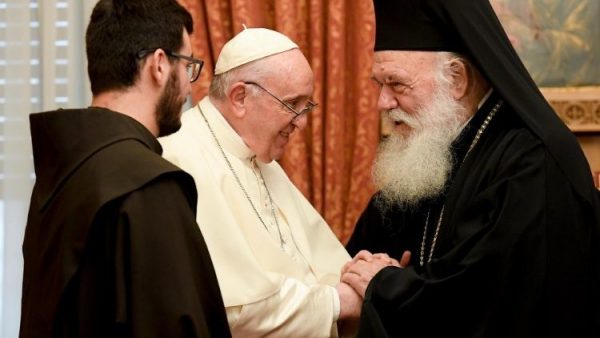 Pope Francis admitted that “actions and decisions that had little or nothing to do with Jesus and the Gospel, but were instead marked by a thirst for advantage and power” became the cause of division between Christians.

“Grace to you and peace from God” (Rom 1:7): with these words of the Holy Apostle Paul, with which he greeted the Roman believers from the Greek land, Pope Francis began his address to His Beatitude Ieronymos II, Archbishop of Athens and All Greece, whom he met on Saturday, December 4 in Athens, reports Vatican News.

“Our meeting today renews that grace and peace,” said Pope Francis greeting Archbishop Ieronymos II. “As I prayed before the great shrines of the Church of Rome, the tombs of the Apostles and martyrs, I felt compelled to come here as a pilgrim, with great respect and humility, in order to renew that apostolic communion and to foster fraternal charity.”

He then mentioned the roots that unite Catholic and Orthodox Christians, “Underground, hidden, frequently overlooked, those roots are nonetheless there and they sustain everything. What are our common roots that have endured over the centuries? They are the apostolic roots.” Unfortunately, over time, they began to grow apart from each other:

“Worldly concerns poisoned us, weeds of suspicion increased our distance and we ceased to nurture communion. <…> Shamefully – I acknowledge this for the Catholic Church – actions and decisions that had little or nothing to do with Jesus and the Gospel, but were instead marked by a thirst for advantage and power, gravely weakened our communion. In this way, we let fruitfulness be compromised by division. History makes its weight felt, and here, today, I feel the need to ask anew for the forgiveness of God and of our brothers and sisters for the mistakes committed by many Catholics.”

According to the head of the Roman Catholic Church, only the Holy Spirit can help Orthodox Christians and Catholics work towards communion, “Let us implore the Spirit of communion to spur us to follow his lead and to help us base communion not on calculations, strategies and expedience, but on the one model to which we must look: the Most Holy Trinity.”

At the end of his address, Pope Francis mentioned, “The Catholic Church has just set out on a path aimed at deepening synodality and we feel we have much to learn from you.”

Most viewed articles
Five Signs of a Modern Pharisee210
ROC Holy Synod Discusses the Announcement of the Patriarchate of Alexandria Concerning the Establishment of the ROC Patriarchal Exarchate of Africa160
Bad Habits And Their Cure111
Medical Workers Walk 1.5 Km Through Snowdrifts and Save the Life of a 100-Year-Old Woman107
Grains of Wisdom and Piety Book Published88
150th anniversary of the establishment of the North American diocesan see in San Francisco52
Time for a Course Adjustment?41
Church from time of St. Stephen the Great becomes monastery20
Most popular authors
Pravmir.com team407
Archimandrite Markell (Pavuk)210
Saint Nicodemus the Hagiorite111
Fr. Stephen Powley41
Ștefana Totorcea20