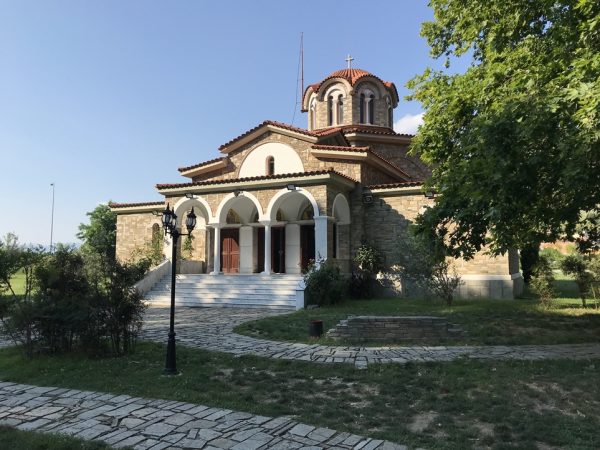 On June 27-28, 2019, Metropolitan Hilarion of Volokolamsk, head of the Moscow Patriarchate department for external church relations (DECR), continued his pilgrimage in the steps of St. Paul.

Passing through Drama, Metropolitan Hilarion paid a visit to Metropolitan Pavlos of Drama, saw the Cathedral of the Transfiguration under construction and other churches and church establishments of the metropolis.

Together with his fellow travellers, he saw the archaeological monuments in the antique cities of Philippi and Neapolis (modern Kavala), the first places in Europe to hear St. Paul’s preaching of the gospel.

Philippi is associated with the story in the Acts of the Apostles about the baptism of Lidya (Acts 13-15), which is marked today by a baptistery, and about the healing of a female slave who was possessed with an evil spirit and St. Paul’s  and his companion Silas’s imprisonment and miraculous deliverance (Acts. 22-23). The remains of that prison have survived to this day.

Most viewed articles
The Truth About Riches170
The Muskox Response To COVID-19118
Metropolitan Onuphry Speaks on How to Protect One’s Soul From Sin95
Patriarch Porfirije Thanks the Russian Church for Participation in Restoring Serbian Churches89
March for Life participants optimistic for a post-Roe America: ‘This is just the beginning’49
Most millennials, Gen Z adults support bans on abortions when baby’s heartbeat is detected: poll48
Do We Act Differently Than Others?43
Strong Orthodox Presence at the 2022 March for Life30
Sunday of the Samaritan Woman1
Most popular authors
Pravmir.com team262
Fr. Gabriel Bilas170
Archpriest Michael Gillis118
Ryan Foley49
Priest Luke A. Veronis42
Maria Trushanina1