Source: DECR
Natalya Mihailova | 03 September 2014
On 2 September 2014, Metropolitan Hilarion of Volokolamsk, chairman of the Moscow Patriarchate’s Department for External Church Relations (DECR), met with the Primate of the Evangelical Lutheran Church of Finland, Archbishop Kari Mäkinen of Turku and Finland. 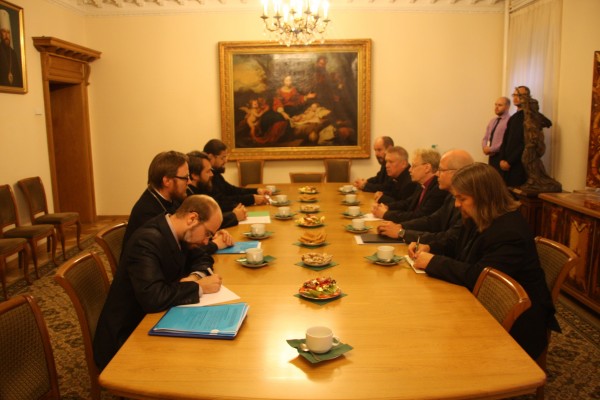 They were joined in the meeting, which took place at the DECR premises, by the Revd. Kimmo Kääriänen, executive director of the Department for International Relations of the Evangelical Lutheran Church of Finland; the Revd. Dr. Mika Pajunen, theological advisor to the Archbishop of Turku and Finland, and canon Timo Roskvist.

Taking part in the meeting on the part of the Russian Orthodox Church were archimandrite Philaret (Bulekov), vice-chairman of the DECR; hieromonk Stefan (Igumnov), DECR secretary for inter-Christian relations; and Artem Borzov, a DECR staff member.

The meeting was dedicated to the discussion of prospects of the theological dialogue between the Russian Orthodox Church and the Evangelical Lutheran Church of Finland. The dialogue has been carried out since 1970.