Source: DECR
Natalya Mihailova | 31 August 2016
From August 20 to 30, 2016, Metropolitan Hilarion of Volokolamsk, head of the Moscow Patriarchate’s department for external church relations (DECR), was on a working visit to Belgrade, with the blessing of His Holiness Patriarch Kirill of Moscow and All Russia. 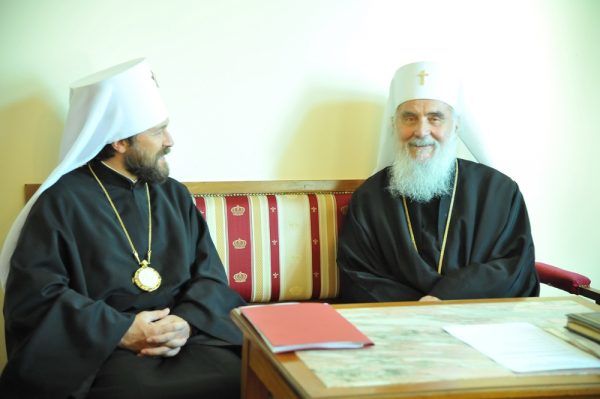 On August 30, Metropolitan Hilarion met with His Holiness Irenaeus, Patriarch of Serbia. They were joined in their talk by Metropolitan Amfilohije of Montenegro and the Littoral and Bishop Irinej of Bac, members of the Holy Synod of the Serbian Orthodox Church. In the course of the talk, which was held in a warm and friendly atmosphere, the sides discussed a number of issues of mutual concern.

After the meeting Metropolitan Hilarion left for the residence of the President of the Republic of Serbia for signing an agreement on transferring the first charitable tranche for a project for the adornment of the St Sava Cathedral in Belgrade.

The donation agreement was signed by Mr. A. Dybal, deputy director general for corporate communications of the pubic joint-stock company ‘Gazpromneft’, His Holiness Patriarch Irenaeus, president of the Society for Building the St. Savva’s in Belgrade, Mr. T. Nikolic, chairman of the Society’s board of patrons, and Ms. M. Popova, vice-chair of the Moscow International Foundation for UNESCO and a full member of the Russian Academy of Arts.

Present at the ceremony were also Metropolitan Amfilohije, Archpriest Vitaly Tarasjev, rector of the ROC Belgrade Representation, Russian Ambassador to Serbia A. Chepurin, Ms. L. Glebova, head of the Federal Agency for the CIS, Compatriots Living Abroad and International Cooperation (Rossotrudnichestvo) and her deputy A. Radkov, Ms. N. Kuschenkova, director of the Russian House in Belgrade, M. Mukhin, Russian People’s Artist, as well as diplomats, politicians, and cultural and arts figures in Russia and Serbia.

Speaking during the signing ceremony, Metropolitan Hilarion said in particular,

‘I would like first of all to extend cordial greetings to all of you on behalf of His Holiness Patriarch Kirill of Moscow and All Russia.

‘For the last 28 years, 28 thousand churches have been restored from ruins or re-built in the Russian Orthodox Church. It means that we have opened a thousand churches annually or three churches a day. Certainly, for these years we have accumulated an enormous experience in restoration, construction and adornment works. We have formed excellent and highly professional teams of artists capable of adorning churches in any technique known to history, be it mosaic, frescoes or something else. We are delighted today at the opportunity to share the accumulated knowledge and the opportunity for our masters to work under the cupola of the most magnificent Orthodox church in the Balkans.

‘When the Serbian Orthodox Church proposed that we take part in this project, His Holiness Patriarch Kirill agreed without hesitation. However, considering the scale of the project and the volume of the work ahead, it became clear that it was impossible to implement it without the support of the Russian State. For this reason, His Holiness Patriarch Kirill appealed to the President of the Russian Federation. The participation of the Russian Federation in this large-scale project was confirmed, and today we are glad that the project moves to the practical plane.

It is planned that during the first stage in the adornment of the St. Sava Cathedral in Belgrade, a team of masters led by Russian People’s Artist M. Mukhin together with mosaic painters from the St. Elizabeth Convent’s workshop in Minsk will paint mosaics in the cathedral’s cupola to be completed at the end of 2017, and the next stage (adorning the sanctuary apse) to have been completed by the 800thanniversary of the autocephaly of the Serbian Orthodox Church to be marked in 2019.

During his visit to Belgrade, Metropolitan Hilarion visited the Russian Federation Embassy in Serbia to meet with Ambassador A. Chepurin.

The DECR chairman also visited the Russian House in Belgrade, where he met with the Rossotrudnichestvo chair Ms. L. Glebova. They discussed a wide range of issues of mutual concern and agreed to broaden the cooperation.

The St. Sava Cathedral has been designed as the cathedral church of the Serbian Patriarchate and the largest Orthodox church in Europe. It began to be built in the last century 30s in Vracar, the place in Belgrade where the relics of St. Sava of Serbia (1175-1236), the founder and the first Primate of the autocephalous Serbian Orthodox Church, were burnt on the order of the Turkish authorities. It became possible to resume the construction as late as 1985. At present, the interior of the cathedral, 17 square meters, is to be adorned with frescoes.

In accordance with the Protocol, a Russian-Serbian working group was set up in 2013 for coordinating the joint work. It established the membership of the contest jury for the best artistic design of the St. Savva’s interior. The contest jury was co-chaired by Metropolitan Hilarion of Volokolamsk and the Serbian Prime Minister First Deputy I. Dacic.

In summer 2014, an All-Russia Open Contest was announced for the best interior design for St. Savva’s, which was won by the project offered by the International Foundation for UNESCO prepared by the team led by Russian People’s Artist M. Mukhin. The second place went to the project presented by Byelorussian mosaic painters from the St. Elizabeth Convent workshop in Minsk.