Source: Pravmir.ru
Natalya Mihailova | 19 November 2014
November 16, 2014. During the visit of His Holiness, Patriarch Kirill of Moscow and All Russia, to Serbia, a consecration service of a memorial plaque in honor of Metropolitan Antony (Khrapovitsky) took place on November 15. The event is associated with the 150th anniversary of his birth which occurred on March 29, 2013. 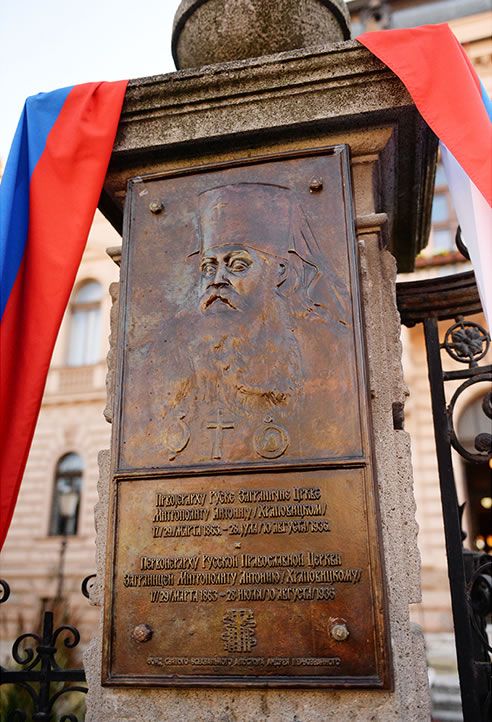 The plaque was chosen to be installed at the gate of the Patriarch’s Palace in Sremski Karlovci, which the Serbian Orthodox Church gave Russian hierarchs in possession in 1921. The palace was the residence of the Russian Orthodox Church Abroad until 1946. 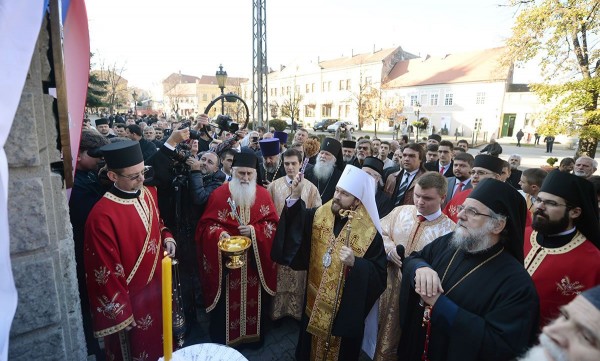 Your Eminences and Your Graces! Righteous Fathers! Dear Brothers and Sisters!

We have gathered here today in order to honor the memory of one of the outstanding Russian hierarchs of the twentieth century – Metropolitan Antony (Khrapovitsky), the 150th anniversary of whose birth we celebrated last year.

The personality of Metropolitan Antony (Khrapovitsky) – a zealous archpastor, a profound thinker, an inspiration and a mentor of academic monasticism – holds a special place in the history of the Russian Orthodox Church.

Metropolitan Antony spent the last 15 years of his life here, in Sremski Karlovci, until his decease in 1936. Here he, among other Russian hierarchs – refugees, was invited by His Holiness, Patriarch Dimitrije of Serbia. His Holiness Dimitrije gave them this magnificent building of His Eminence’s residence in possession with love. At this point it is relevant to remember the God-inspired word of the Wise Solomon: “A friend loveth at all times, and a brother is born for adversity” (Proverbs 17:17).

Here, in Sremski Karlovci, tragic events echoed almost one hundred years ago in Russia, which led to a fratricidal internal war and the division of the Russian Orthodox Church. Today these events are historical heritage. We continue to thank God for His mercy, which He showed in the restoration of the canonical unity inside our Church in 2007. We will never forget the great deeds of the Serbian Orthodox Church showing living Christian love and warm hospitality. The Serbian Church was among those who actively supported and welcomed the process of reuniting the Russian Orthodox Church Abroad and the Moscow Patriarchate, contributing to the success of this historical undertaking.

The memorial plaque that we are currently opening, which was produced with the help of the Russian Fund in honor of the Holy Apostle Andrew the First-Called, is not merely a contribution to the memory of Metropolitan Antony, but also a monument to fraternity, which has united the Russian and Serbian Orthodox Churches for many centuries.

Let the good memory of pious Archbishops of Pec, Metropolitans of Belgrade and Karlovci, and His Holiness, Patriarchs Dimitrije and Varnava of Serbia, live forever! Let the good memory of the Most Reverend Metropolitan Antony live forever! I have deep reverence for the Reverend Vasily of Syrmia, residents of Sremski Karlovci, and all spiritual children of the Holy Serbian Orthodox Church for their genuine love for their brothers in Russia!

Most viewed articles
“Do Not Weep”145
Best Films of the Pokrov Film Festival Have Been Determined129
Christ the Life Giver129
The Religion of Self81
(VIDEO)Celebrating 5 years of Byzanfest International Orthodox Film Festival79
Patriarch Kirill Answers Questions from Participants of the Ninth Faith and Word Festival74
“He preached the message of the Resurrection for 12 years”: First Bishop of Deva Gurie Georgiu laid to rest at Cathedral of St Nicholas19
Patriarch Kirill: “An Effective Way to Overcome Social and Economical Dead End Is to Be Guided by the Word of God”12
Using Our Time Wisely to Cultivate the Seeds of Faith2
Most popular authors
Pravmir.com team294
Archpriest Peter Olsen145
Fr. Theodore Stylianopoulos129
Fr. Gabriel Bilas81
Aurelian Iftimiu19
Priest Luke A. Veronis2