Source: DECR
Natalya Mihailova | 07 October 2016
On October 6, 2016, Metropolitan Hilarion of Volokolamsk, head of the Moscow Patriarchate’s department for external church relations (DECR), met with a group of Catholic priests from Ireland, led by Archbishop Diarmuid Martin of Dublin, at the DECR. 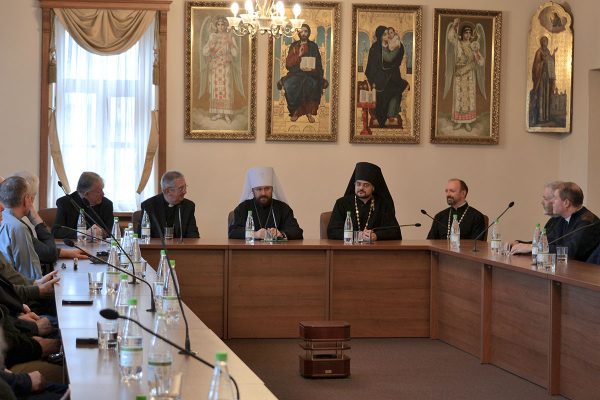 The group is making a pilgrimage to Moscow and St. Petersburg.

In the beginning of the talk, which was held in English, the DECR chairman and Archbishop Diarmuid Martin exchanged warm greetings. The archbishop introduced his group to Metropolitan Hilarion, noting that the aim of their trip to Russia was to come to a more profound knowledge of the tradition and today’s life of the Russian Orthodox Church.

In his remarks, Metropolitan Hilarion briefly but succinctly related the major stages in the history of the Russian Orthodox Church, beginning from the Baptism of Rus’ in 988 to our days. His Eminence made a special mention of the tragic period in the history of the Church in the 20th century marked with terrible persecutions for the faith, closure and destruction of churches, persecution of the clergy and faithful. He stressed that in the post-communist time the Russian Orthodox Church, for the first time for long years, received an opportunity for freely defining its inner development, building its relations with the Russian state and other countries and international organization and developing dialogue and cooperation with Christian churches and communities as well as other religions.

It was not accidental, he said, that the new era in the history of the Russian Church has been already called ‘the period of the second baptism of Russia’. His Eminence cited the striking figures: for the quarter of a century of the Church’s rebirth, over 25 thousand churches have been built, with 1000 churches opening a year, i.e., about three churches a day; monastic life has been resumed in some 860 monasteries; over 50 theological schools have been opened, and the religious life has been fully regenerated.

Metropolitan Hilarion also spoke about the present canonical order of the Moscow Patriarchate whose jurisdiction is spread over the territory of the former Soviet Union, except for Georgia and Armenia, as well as Japan and China and dioceses and parishes in the diaspora.

He made a special mention of the reform of theological education, pointing to considerable achievements made in the recent years, such as the establishment of a Dissertation Council for the specialty of Theology, whose academic degrees will be recognized by the state along with academic degrees in other fields of knowledge, and the introduction of the Basic Orthodox Culture as a discipline in general school. In recent years, thanks to the assistance of the Roman Catholic Diocese of Dublin, students of the Russian Orthodox Church have an opportunity for taking the English language courses in Dublin.

A considerable part of the talk was devoted to the fruitful development of bilateral relations between the Moscow Patriarchate and the Roman Catholic Church at the present stage, especially in the light of the historic meeting between His Holiness Patriarch Kirill of Moscow and All Russia and Pope Francis of Rome on February 12, 2016, in Cuba. Metropolitan Hilarion stressed that the protection of the traditional family, aid to persecuted Christians, and cooperation in the sphere of education and culture are the priority areas in the Orthodox-Catholic cooperation.