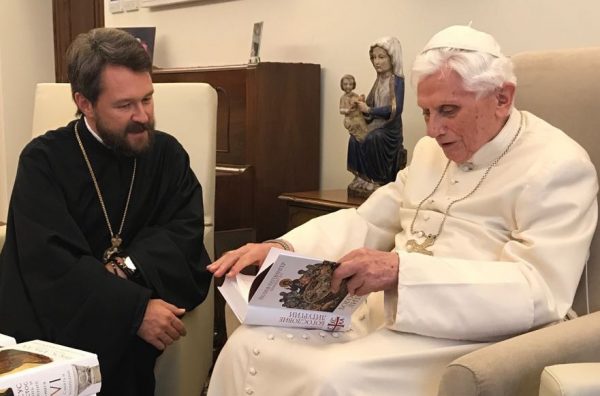 Meeting Metropolitan Hilarion at the airport in Rome were Bishop Matfei of Bogorodsk, administrator of the Moscow Patriarchate’s parishes in Italy; Mr. Alexander Avdeyev, Ambassador Extraordinary and Plenipotentiary of the Russian Federation to the Vatican; and Rev. Hyacinthe Destivelle, a staff member of the Pontifical Council for Promoting Christian Unity.

On September 25, at the Vatican, the DECR chairman met with Pope Emeritus Benedict XVI. Metropolitan Hilarion congratulated Pope Benedict on his 90th birthday and conveyed to him warm greetings and wishes from His Holiness Patriarch Kirill of Moscow and All Russia.

During the meeting, the DECR chairman told the Pontiff Emeritus about the meeting between Patriarch Kirill and Pope Francis that took place in Havana on 12 February 2016, as well as about various aspects of cooperation between the Russian Orthodox Church and the Roman Catholic Church.

In reply to Pope Benedict’s question about the revival of faith in the canonical territory of the Russian Orthodox Church, Metropolitan Hilarion told him about the construction of new churches and monasteries, the establishment of theological faculties in secular universities, and the Church’s publishing and educational activities.

Metropolitan Hilarion presented Pope Benedict XVI with the Russian edition of the Pontiff Emeritus’ book entitled “The Theology of Liturgy,” prepared by the Publishing House of the Moscow Patriarchate in cooperation with the St. Gregory the Theologian Charity Foundation. Pope Emeritus warmly thanked the DECR chairman for the gift and expressed his wish that the Orthodox Christians in Russia might find his book in its Russian translation helpful for the better understanding of the Liturgy.