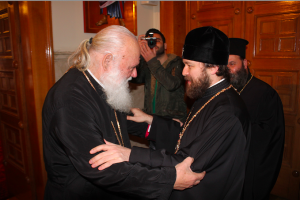 On 24 February 2014, with the blessing of His Holiness Patriarch Kirill of Moscow and All Russia, Metropolitan Hilarion of Volokolamsk, chairman of the Moscow Patriarchate’s Department for External Church Relations, visited Athens and met with His Beatitude Archbishop Ieronymos II of Athens and All Greece.

The participants in the meeting discussed various issues of the bilateral relations between the Russian and the Greek Orthodox Churches, as well as some questions of the pan-Orthodox agenda, and shared their opinions on the situation of Christians in the Middle East and other regions.