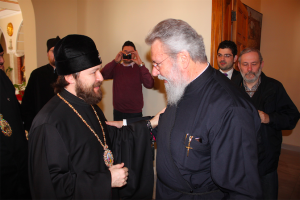 On 24-25 February 2014, Metropolitan Hilarion of Volokolamsk, chairman of the Moscow Patriarchate’s Department for External Church Relations, visited Cyprus with the blessing of His Holiness Patriarch Kirill of Moscow and All Russia.

Next day, Metropolitan Hilarion met in Nicosia with His Beatitude Archbishop Chrysostomos of New Justiniana and All Cyprus. Taking part in the meeting were Metropolitan Isaias of Tamassos and Orini; Bishop Gregory of Mesaoria; archpriest Igor Yakimchuk, DECR secretary for inter-Orthodox relations; deacon Anatoly Churyakov, a DECR staff member; and hierodeacon Nikolai (Ono).

Metropolitan Hilarion of Volokolamsk conveyed to the Primate of the Orthodox Church of Cyprus fraternal greetings from His Holiness Patriarch Kirill of Moscow and All Russia. Among the issues discussed at the meeting were cooperation among the Local Orthodox Churches and various aspects of bilateral relations between the Russian Church and the Church of Cyprus.

Metropolitan Hilarion also met with H.E. Mr. Stanislav Osadchiy, Ambassador Extraordinary and Plenipotentiary of the Russian Federation to the Republic of Cyprus.

That same day, the DECR chairman and his suite left for Russia.